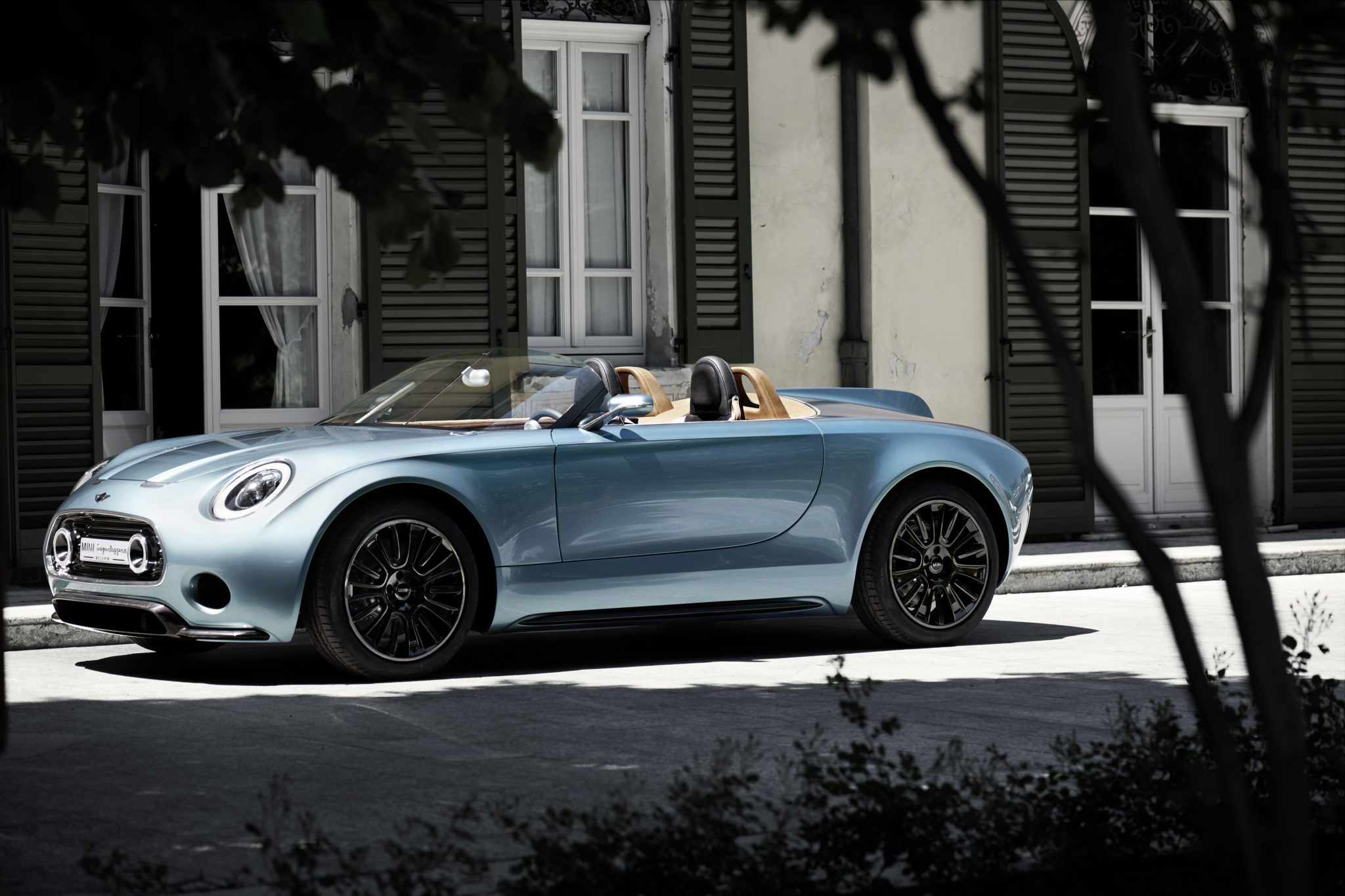 MINI did a real sneaky with the unveiling of MINI Superleggera Vision Concept with the press release, images and video all going live on late Friday evening on the 23rd May 2014. Where was my invite to Italy???

Before you start moaning that Superleggera is only for Lamborghini therefore it’s not a real Superleggera. Superleggera means ‘Super Light’ to which it is with aluminium body panels & Carbon fibre chassis and the coach building company who made it  is called Superleggera.

Here is a quick history into Superleggera – Started in 1926, Touring Superleggera is forerunner of advanced automotive design and custom coachbuilding. The company is one of the rare firms offering the whole in-house productive cycle from the first sketch, all the way through surface engineering and structural analysis, style models and prototypes, to turn-key, low-volume production of special bodywork.

The company was located just north of Milan, near Alfa Romeo, Italian Citroën, and the former Isotta-Fraschini plant.

With any great automotive design, anyone has to instantly recognise what is from a glance.

The front of the concept gives it away instantly with the round headlights but from the back I would have no clue to what it could be. Honestly from a distance it could be anything from Jaguar D-type to Marcos Mantis

The design language of the model is very minimalist with just surface creases to emphasis the contours and body line as coach builder Superleggera hand shaped sheet aluminium for the body. The deep lustrous paint is called Como Blue which really brings out the body lines and exposed aluminium touches.

Being a man of finer details there are a few you might miss with the bonnet stripes not actually being bonnet stripes but inlaid bonnet harks a small homage to British of yesteryears. Fuel cap on the front wing is another sporting touch to old racers, while that rear fin is such a Jaguar D-type detail.

There is going to be no question that you have been passed by a British car as the tail lights form the Union Jake.

This model doesn’t seem to be for posers but an out-and-out performance model with the exposed cross braces on the doors and smerk inducing BOOST button the steering wheel. Reading through the press release there was quick mention of an electric motor!

Hmmm will MINI receive the same engine setup from the i8 which shares the same 3 pot engine.

I have always been a sucker from carbon fibre and the concept doesn’t disappoint with a carbon splitter to cut the air infront while the two circular holes in the front bumper are designed to feed the engine air.

This coach building theme is carried on with interior as an infusion of exposed aluminium, Sabbia coloured leather and a digital console make for a real merging of form and function.

To enter this beauty you either literally jump into it or press the open button by the leather wrapped roll bars (I would personally choose to jump in). Whilst you’re in your in, as I don’t think I would want to leave as the seats are a hybrid mix of classic roadster and racing bucket seat with a four point harness.

Now where do I put my driving gloves and shades?

Before I wrote this article I watched a video by Jay Leno on Steve McQueen’s 1956 Jaguar XKSS a real race car for the road. It is definitely worth a watch as it shows what roadsters are meant to be and I think MINI hit the nail on the head with getting Superleggera to build the concept. But MINI could have got it horrible wrong like the Lamborghini 5-95 Zagato.

Will MINI make the F56 bumper look as gooooooodddd as this concept!!!

Is this concept a look into the future? New MINI Roadster? Is this another Concept which wont see the light of day?

I want to hear your opinions on this concept – Do you like or loathe it?