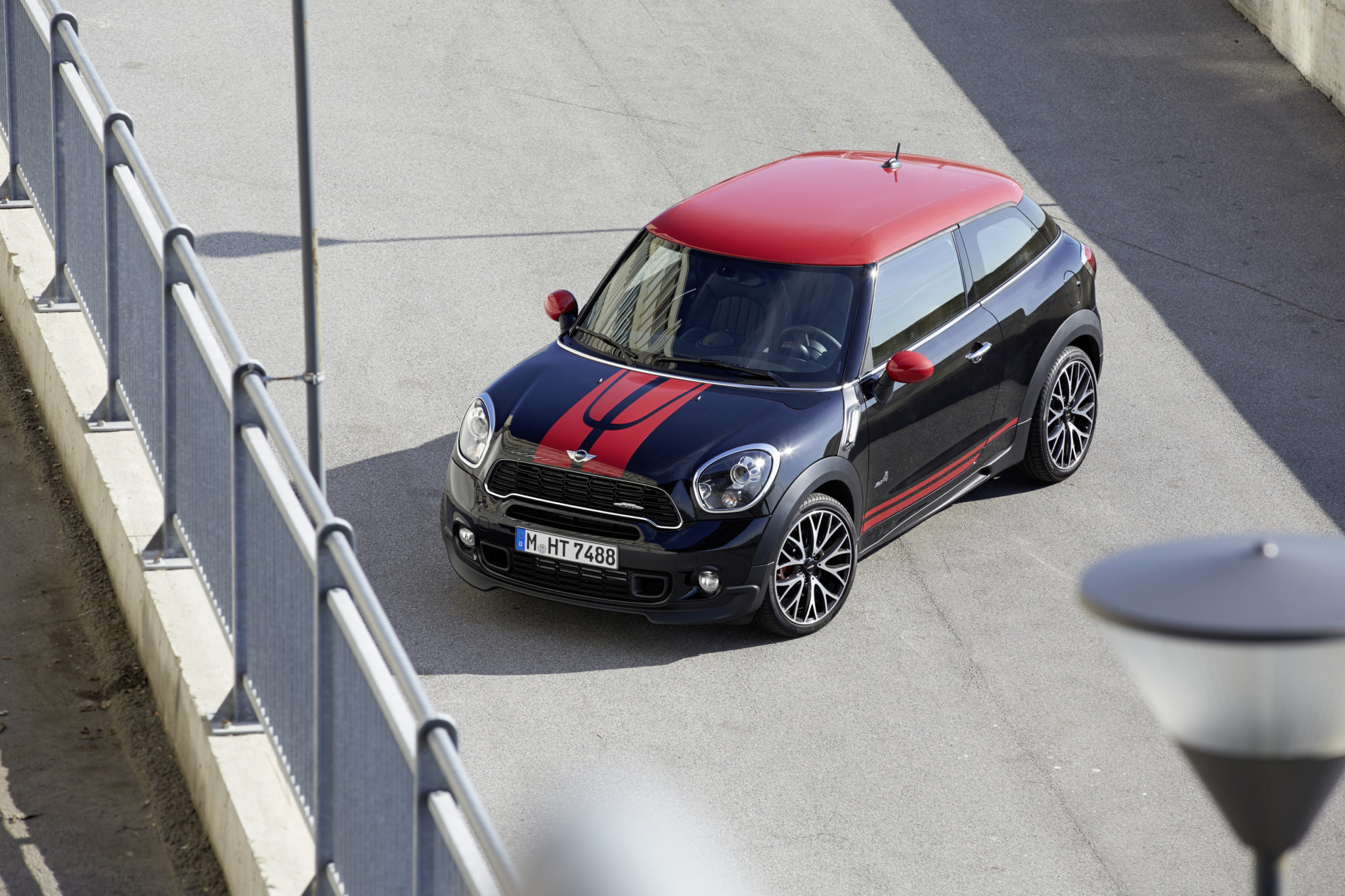 MINI is NOT NORMAL and always up for a MINI ADVENTURE, so it was no surprise when MINI announced the Paceman to complement the MINI Countryman.This odd ball was officially unveiled at the Paris Motor show in 2012. The Paceman is built on the same platform as the Countryman but with added Joie de vivre at its derrière.

The MINI Paceman is designed to be more of sporty looking Countryman with two fewer doors with a coupe like appearance without losing any of the MINIness, which adds to the reason why you buy a MINI? To be DIFFERENT. But there has to be some level of practicality to the car when you lose two doors and headroom, so MINI slimmed the dashboard and put a smile on your face with a centre console reminiscent of Mickey mouse’s face.

If you’re sat there and wondering what’s the point of it? Have you looked at the BMW 3 series coupe, Mercedes-Benz CL Coupe or Rolls Royce Wraith. Still don’t get the point? People buy cars on looks alone

MINI Shrewsbury kindly provided me with a JCW Paceman but it wasnt any Paceman it was the dealership principles, so I was interested to see what CD he had stored in his car…

Rocking the metallic absolute black with JCW red top roof, JCW Bodykit and the standard fitment of 18 inch burnished twin spokes wheels finish off the exterior road presence of the JCW Paceman. Under the hood there is the updated N18 JCW engine which develops 218 Bhp with 300NM of torque on overboost.

On the inside both the Chilli & Media pack were ticked so the Xenon lights,  auto lights & wipers, sat nav, MINI connected, Bluetooth were all there for the techno junkies to fiddle with. As you enter the JCW Paceman you are greeted to the JCW door sills and all around more comfortable seats compared to the hatch. The seats in the Countryman & Paceman are how they should have come in hatch with better support for the back and legs regardless of your size.

In the Paceman there is seperate seating for four, each with its own zone and cup holder. The boot space is more than ample for the MINI adventures ahead from the daily grind. This added space is down to Countryman platform being used, while the compact dashboard increases space for the front and back making it great gran tourer with lush sloping rear end.

As we taking about controversy the Paceman seems to be like a baby BMW X6. Its strangely the first MINI to have horizontal rear lights breaking the tradition of the vertical lights but the circle theme remains within the lights and cabin. I gather it was design decision to have horizontal lines to draw you away from how big the Paceman whilst keeping the elegance of a coupe.

Personally I loved the look of the Paceman when I saw concept, it looks miles better than the Countryman and its reminiscent of a BMW X6 which all the girlies love. But I sat there as an aficionado wondering if it would drive like a MINI or would that poor little 1.6 litre be up for the task for lugging around another half a tonne or something.

The Paceman was all ready to go outside of the dealership to what I could describe as a typical British day aka it was cold and raining. This made it a less perfect for video shooting but perfect for me to test out the ALL4 four-wheel drive system. I fired up the JCW Paceman to muted sound to which was a surprised by given the N18 likes to be abit more noisy when the sports mode is activated. I poodled out of the dealership letting the Paceman warm up before the test drive ahead, I pressed the sports button to see if we could get some more noise out of her but sadly she wasn’t playing ball.

That was disappointment number one, where is the noise? well the complete lack of it! I would have thought with sports button on the noise would increase but it clearly didn’t. Maybe the mapping on the JCW Paceman is either for performance or refinement, as no matter how I tried during the test drive it refused to pop n bang.

I tried to think of plausible reason for it not to do so and came to the conclusion it was either the lack of miles on the clock or MINI themselves have muted it because of the different target audience for the car. But like anything MINI it can be improved by the after market, so I whole heartedly recommend a sports cat, catback system or  a cheeky removal the resonator to make it sound fruity.

Back to the driving shenanigans, as I drove the JCW Paceman I didn’t think about the four-wheel drive system underneath me as there wasn’t any clunking or greater rolling resistance to get it going. The only difference arrived in the corner as the nature of the JCW engine encourages you to drive fast but the ALL 4 system allows you plant the gas mid corner. This added mid corner ability to put the down the power is what makes the JCW Paceman fun to drive as you learn a new technique of how to drive it through corners eagerly waiting to leave anyone behind in your rear view.

It is addictive to be so leisurely with the throttle as you play cat and mouse with the grip levels seeing how early you can apply throttle through corners. So much so I doubled back on myself a couple of times on the test route, I was grinning to myself on the same section of the road with the locals wondering what on earth I was doing. Sorry guys I practising for this years World Rally Championships ; )

The JCW Paceman with the ALL4 feels more planted than hatch with a feeling of a freight train once you get going. Yes I meant when you get going as the extra weight has blunted the performance, the tail wagging happy nature of the MINI is a little lost under the four-wheel drive and extra weight. It not as rampant as the JCW Hatch which chirps under full-bore acceleration, instead the revs need to be at least 3,000 Rpm before you feel power but the low-end torque nature of the turbocharged engine gives nice shove and responsive throttle off the line.

Despite the reduced performance to 7 seconds compared to the Hatches 6 seconds dash to 60, the JCW Paceman is still a joy to drive even with the higher centre of gravity, ride height and ALL 4 system all having no effect at all on the FUN factor.

I wanted to say NO to buying one as the Paceman is nowhere near what a MINI should be in size and weight but I was left with an impression this is a DADDY’S Car. What do I mean by that? While the MINI Countryman is the yummy mummies car, the MINI Paceman is Daddy’s Cool car!

Why Daddy’s Car? You have all the added practicality of SUV sized MINI with all the benefits wrapped in a sexy coupe body, yet you can still have FUN regardless of the weather and what lies ahead. It’s the perfect I am now a DAD car without making you look like a numpty sat behind I have given up mobile called the MPV.

There is BIG elephant left in the room which is the price. How do I put nicely its £29,535 for a base model before you start specing. My test drive model came to £34,000 which is hard to swallow given the options available at the price from a Land Rover Evoque to the Frankenstein styled Nissan Juke Nismo (I secretly like the JUKE’s weirdness). The Evoque is on par on price and you get genuine off road ability but every Mr & Mrs Jones has one. On the other hand the Nismo Juke is a cheaper JDM alternative with a starting of £20,500 and at that price you get Nismo Bucket Recaros as STANDARD!!!!!

Hmmmm they even made a Batman Edition

Lets step back for a second as you buy a MINI to different from everyone else in the first instance. All MINIacs like to add their own personal touch to make their own and make sure no MINI is truly alike. Is it a rational decision to pay £9,000 more than 2 wheel drive Nismo Juke or more than a frugal two-wheel drive Evoque with a diesel engine at £29,200. Yes, the Evoque maybe more appealing to some and Nismo Juke weird to others but the JCW Paceman gets Four wheel drive as standard.

On a performance standard point of view the JCW Paceman is significantly faster than the Evoque at a similar price, which comes in form of the devils juice of a Diesel engine. Here is a bomb shell for you, to rival the JCW’s performance level who have to pay £41,000 which is a COMPLETE UTTER JOKE!!! But the base Nismo JUKE fights back with no of four-wheel drive and with an equally as punch 1.6 litre turbocharged engine which musters up 197 bhp. The Nismo Juke will sprint from 0 to 60 in 7.8 seconds which isn’t quite enough to keep up with the Paceman at 7 seconds flat time. Nice try Juke Wukey

Now that I have enlightened you the JCW Paceman doesn’t seem so expensive given the performance, looks and build quality compared to its rivals. The JUKE is a value proposition, the Evoque is just the poor man’s Range Rover and the MINI Paceman is the modern mans’ choice for an urban SUV. Its been a dumb media hype which has had everyone thinking and including me that JCW Paceman is expensive when it’s not! The Paceman is great car to drive which makes you feel good whilst you know its that bit more special than its rivals

The MINI JCW Paceman is an odd ball of the MINI family, logically it makes no sense but looks alone sell cars. This looker does have style and substance which makes it the perfect gran tourer for long MINI Adventures away or Daddy cool to have FUN on the school run