Everyone inside and outside the MINI world know about the Infamous London to Brighton Run which takes place every year since 1985 with both classic and New MINI coming together for the love the brand. 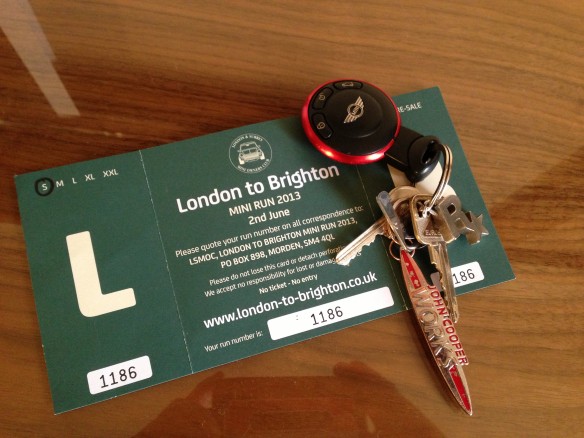 Here are some fun facts:

2009: the event broke the world record for the longest convoy of Minis with a Guinness verified total of 1450 cars.

2010: The event celebrated its 25th anniversary

The Event is believed to be the largest one make car show in the world attracting over 2,500 Minis both classic and modern

Now back to business, having just finished my own organised MINI Run the MIR Run the following Sunday I would be joining the Largest MINI event on the calendar. I have personally always wanted to do this run and I wouldn’t be in bad company with my 2nd family Surrey New MINI.

Just before the event or any MINI Madness I gave my JCW the weekly check over. Having finished the MIR Run I was shocked to see the level of oil left so I topped the oil level with Castrol’s finest 0-30w oil.

MINI Shrewsbury offered to fit my GP2 front under tray for free but might want to ask why I was getting the front under-tray??

I had been doing personally doing alot of reading and research into the GP2 before its release then following up all the information from owners and when I drove one after my local dealership phoned me to ask if I wanted a test drive. One thing I noted was how planted it felt and I went about seeing how it did it but for argument’s sake least but the coilovers to the side and look at the aero on the GP2. MINI clearly state the GP2 reduced lift at the rear axle by 90 per cent because of the aero package (roof spoiler, rear diffuser and underside panelling).

Alot of people have wondered why MINI didn’t inter cooler even this a track orientated vehicle but the front under tray is a clever bit of kit as it as aerodynamic shield underneath reducing drag by the slits which let out hot air out of the engine bay while the NACA ducts suck in cold air creating a vacuum thus cooling the engine further with the benefit of the front end being sucked to the floor at the same time (ground effect).

My tyres were on their way out and so I brought some Continental Sport Contact 5s after my exploits in Germany testing them on Continentals test facilities. Once I got them fitted I was astonished by the extra grip in the wet and dry and the fact I could take corners much faster with them allowing me to fully put down the power at any given moment.

JCW all prepared for the journey it was time get down to cleaning her, out came the snowfoam and pressure washer all top off with a layer of Reload. 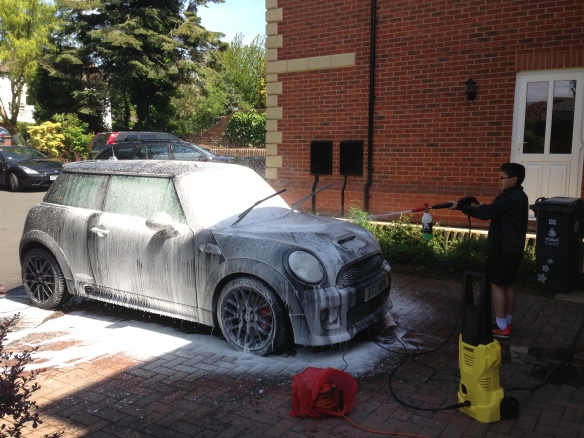 I set off on my 2 and half hour journey to Croydon, London to my hotel and to meet up with Surrey New MINI (SNM). It was grinning whilst I set off to do the L2B run knowing my JCW is being part of the biggest and longest running MINI event over the world. I sat back in my JCW Recaros with Harmon Kardon system playing out the white roof radio podcast. It was genuinely nice driving down this time as traffic was low and the weather was perfect  #RayBansMoments

I planned on meeting up with Christine at a service station so we could convoy down to the hotel together and also we could have our usual giggles over the walkie talkies. We parked up at the hallmark hotel which was opposite our meet point in the morning. I put my cameras on charger and headed down to meet up the SNM gang over the road in Pizza Hut.

There was some new faces at the table with Harry aka Nortonski. He is another young JCW owner in the club who genuinely thought was some old guy given he talked to me on the forums.

With any SNM gathering there is plenty laughs, giggles and stories to listen for us all but god was the service was beyond a joke in this pizza hut with them giving us the wrong orders on the starters, running of food we ordered, 45 minute wait, drinks, main course and final nail in the coffin the incorrect bill.

All feed we retired to our hotel rooms for some Zzzzz as it would be an early start to go pick up our L2B run items from Crystal Palace. I loved the fact my room overlooked my JCW and before I knew it the day came with an early start at 5 in the morning to get ready. 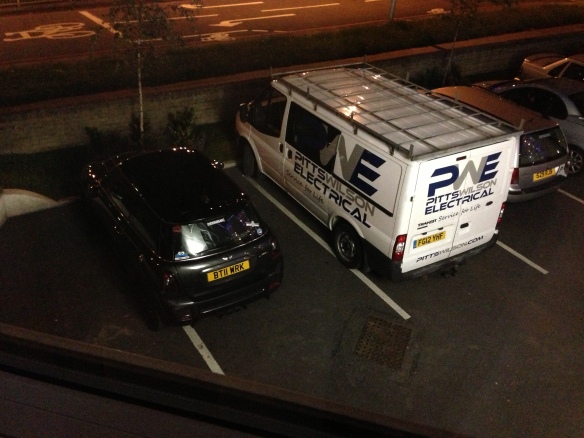 The usual suspects were ready and waiting – Neil, Sarah, Dan and Christine with the rest of the team. We decided to take a few MINIs down to collect L2B Goody bag whilst the others got breakfast or enjoyed the extra lie in. I had to keep an eye on Dan and his craftiness as he has been after some official MINI sun blinds.

We headed out in convoy down the streets of Croydon to Crystal Palace for the starting point of the L2B RUN to where I would meet two of my Instagram followers Mike aka Twelve_75 and Charlotte who both own classics.

I picked up my run pack which includes a Run Plaque, Run Sticker, Run T-Shirt and Official Program. I have been waiting sooo long to get that plaque as its something I wanted my JCW to wear with pride and I brought some flags to have for momentum sake.

Mike came down to meet and introduced him to some of SNM and pointed down to our MINIs all parked up all in a line. Mike was a nice guy with a near on perfect example of a classic mini and you could see still he had passion for minis all this time which made me happy knowing it doesn’t fade away.

We swapped some stories for a while and then pointed out where Charlotte and her mini was. I couldn’t wait to see Charlotte’s mini as it was fully decked out in the golf livery and even the interior was in the infamous light blue and orange colour scheme as well, not bad for a first car!!! 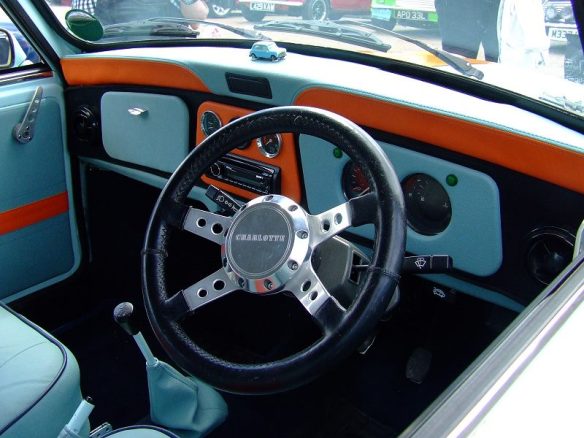 I spoke with Charlotte for a while and she was telling me about her mini and the other IG followers she met and how this was her first mini.

We head back out to my clubs meet point for breakfast and catch up with everyone who would be joining our convoy for the run. We were twenty plus MINIs strong and I was greeted by the elegant Carina who had never met before whilst I enjoying my breakfast. The first words she said to me were ‘ I have been told your quite the MINI fanatic?’ I laughed and replied ‘I am more of a MINI Lunatic to be fair’

I showed Carina around the JCW and told her all the stuff that had been done to it and took for a quick spin around the park lot as we waited to see how my JCW sounded and to enjoy the bucket Recaro seats.

She then proceeded to show me her Cooper S with the JCW power kit aka ‘Alfie’ and it was nice meeting some my age who shares the same passion and does all the nick picky things like I do e.g. parking away from any other car, having rules for passenger in your MINI and that your MINI is more than a machine but an extension of you and your personality. 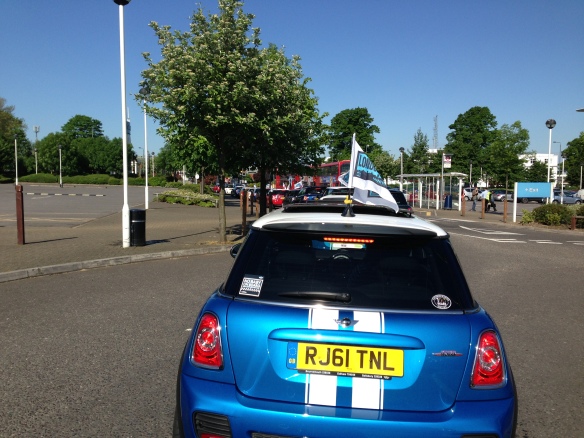 We saw the L2B convoy rolling by so we decided to add our new MINIs to ranks of classics. The roads of Crystal palace and Croydon were skittles which all the minis taking up all roads as far as you could see and your rear view didn’t look shabby either. Once we hit the motorway we left the classics behind and connected back to one another with the radios crackling with chatter of our mini owners on the same channel.

I saw the signs for Brighton and a smug grin came on to my face as it still didn’t dawn upon me that I am doing this event given the amount of times I haven’t thought about it or heard about it. Being a car enthusiasts ever since I could remember and as a child I carried around this booklet of cars and when I spotted them I would tick them off and rattle off specifications and technical details if anyone spoke about any car. I guess we don’t really change much… 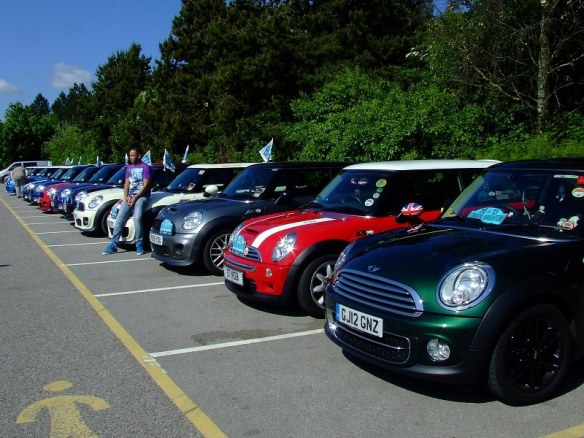 We stopped at a service station to get everyone back together again given the traffic that ensued which gave us chance to admire the classics and new MINIs together. I don’t think there has been a time when we arrived to any car park without causing everyone to stop and stare.

There were some tasty classic all lined up at the service station. 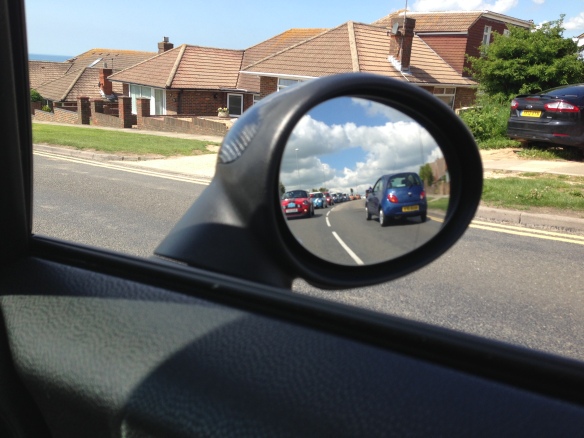 I met a familiar face behind in Cooper S Roadster it was Ashley from the MINI Store that I visited last year during the Olympics.

We were finally there in Brighton and were heading down Madeira drive and it was like Moses has parted the sea with minis and MINIs all lined up the seafront.

There was awesome stand of TV show themed minis 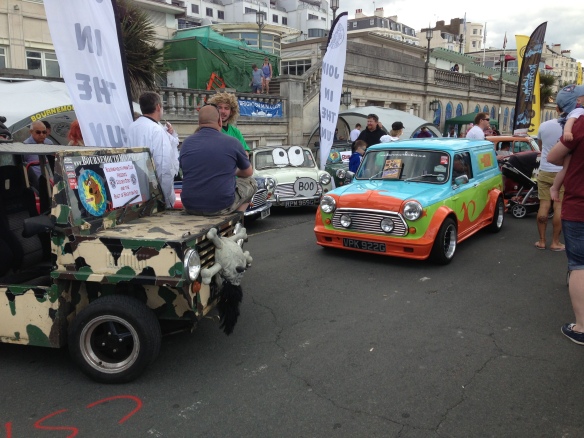 We later hit the show and shine stand 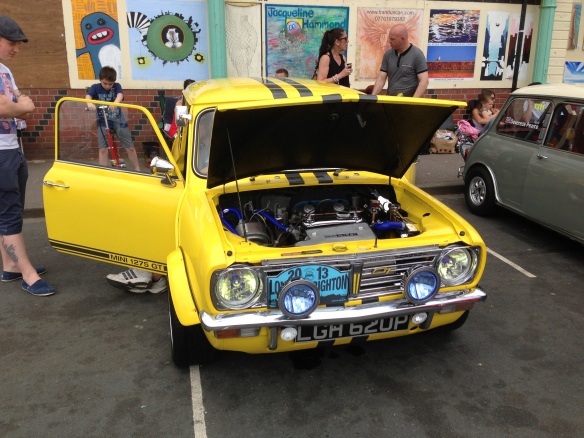 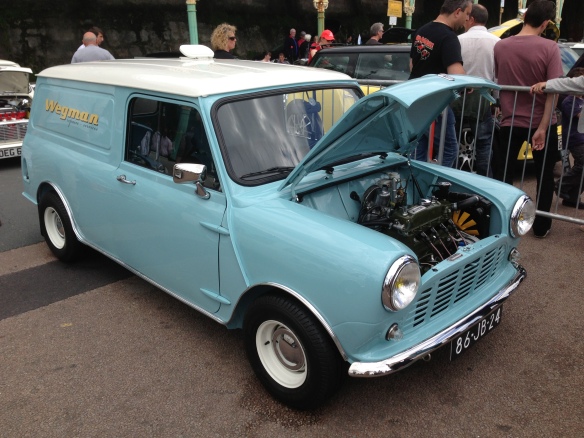 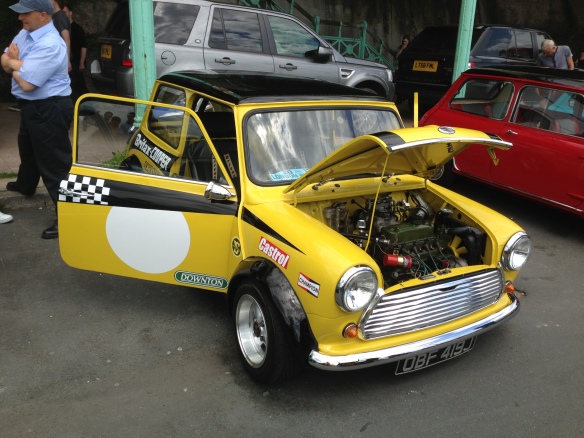 I have always wondered with show and shine show that the majority of these cars are not driven which defeats the point of our a CAR its meant to be DRIVEN!!! Thank god that L2B says that you have to do the run and you’re not allowed to transport it there and that’s how it should be. 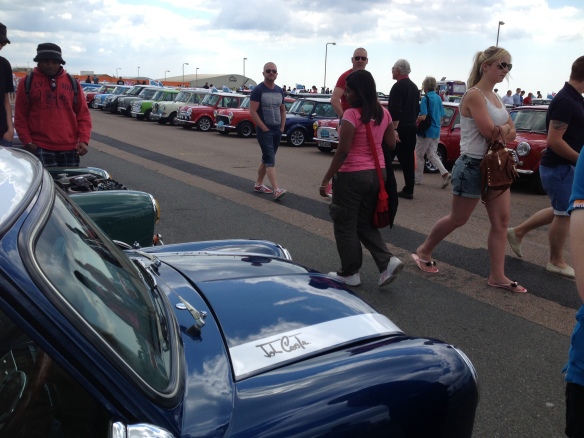 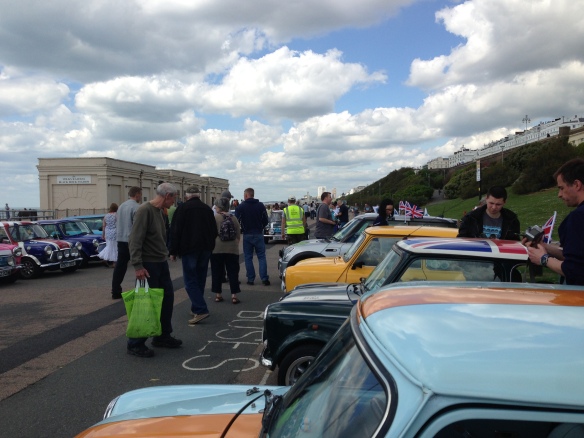 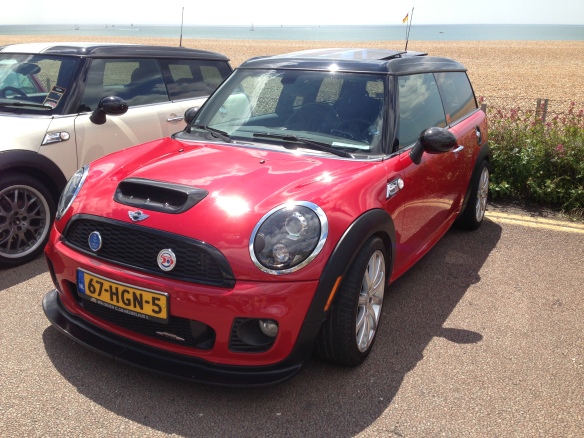 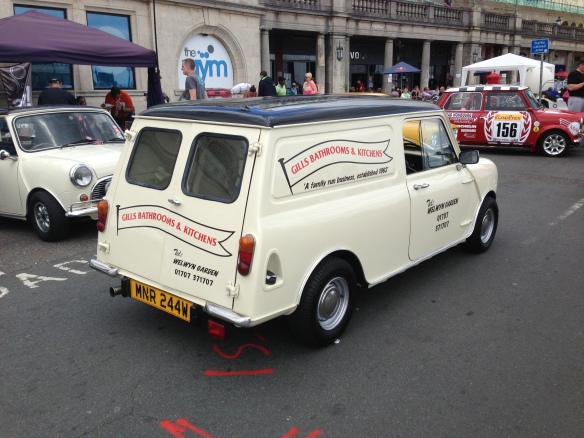 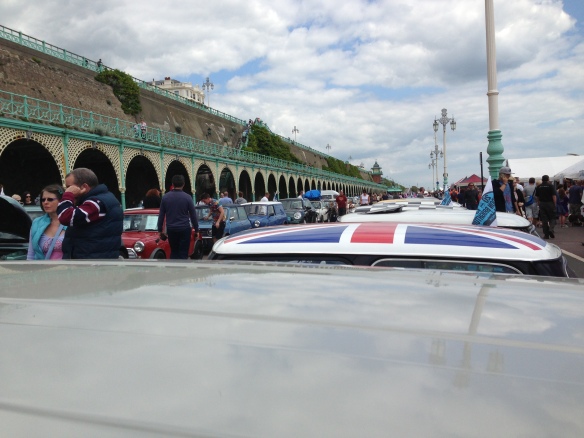 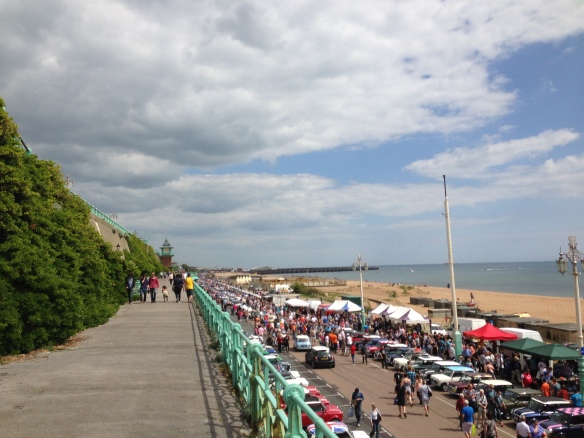 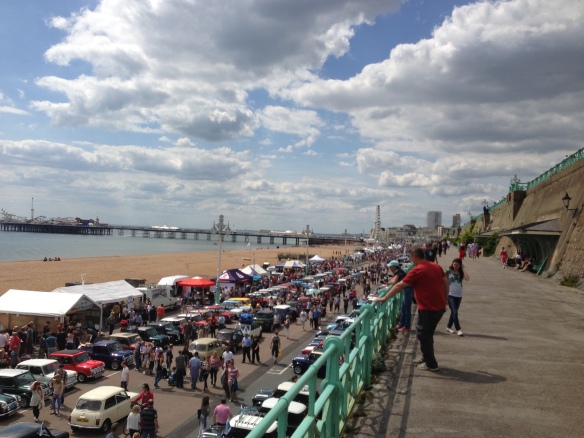 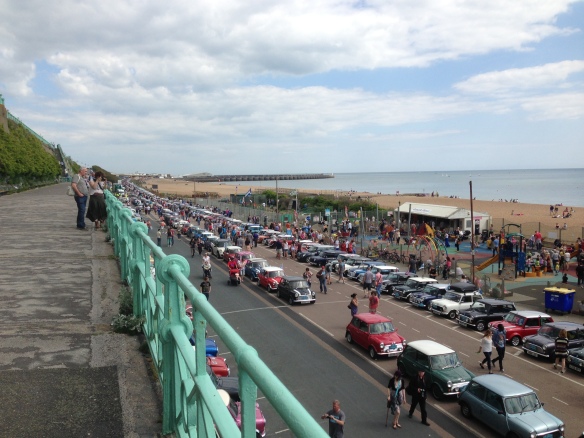 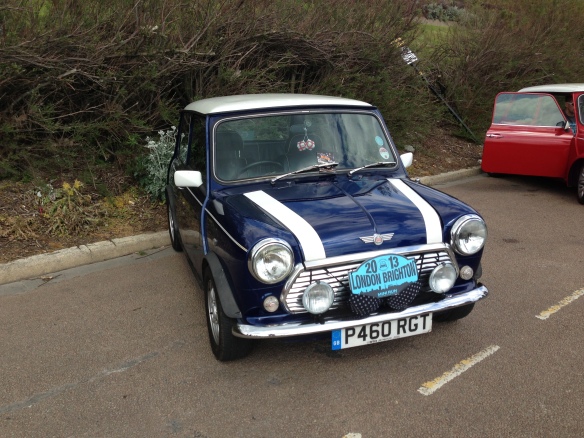 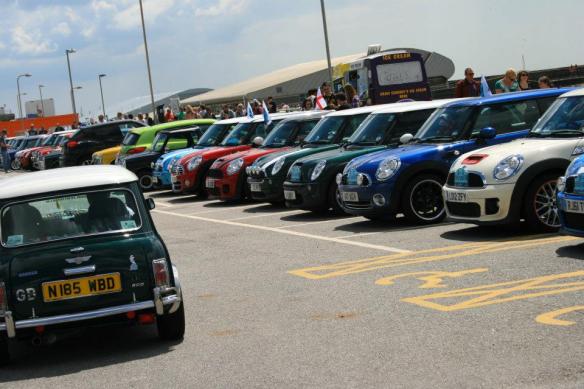 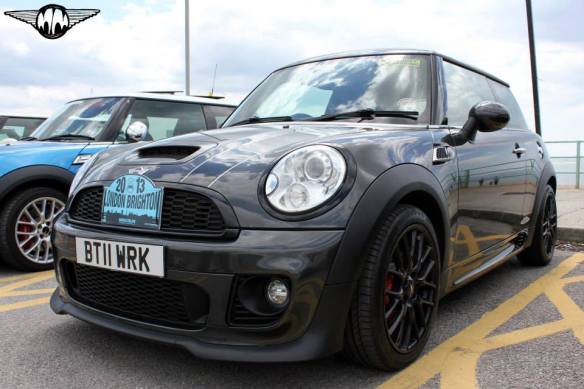 Talking about photos one of SNM member is a keen photographer when I say keen photographer, I am probably under rating her alot as she is truly talented and absolute enjoy to be around. I am talking about the Samieeeeeee who has her own website and Facebook page of all her work.

She is a proud owner of an R50 MINI One aka Stripes and classic mini aka Winnie P.

Can anyone guess what this mini is???

The 1962 Ogle SX1000 based on a Mini with the first cars were built by grafting glass fibre body to a customer supplied Mini. The conversion costed £550 plus the customer supplied base car. Later in 1962, complete cars became available with the 997 cc Cooper version costing £1176. Any of the Mini engines could be specified up to the Mini Cooper S unit which topped out at 110 mph (180 km/h). It is thought that 66 were made. 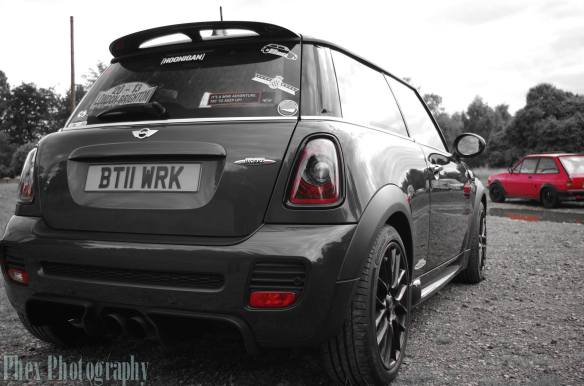 The day came to a close and it was an amazing time being apart of this historic event. I headed back to Birmingham with my JCW wearing the L2B plaque with a sense of pride. My JCW still wears that plaque but it sits on my back window so you can admire my derrière as I pass you ; )