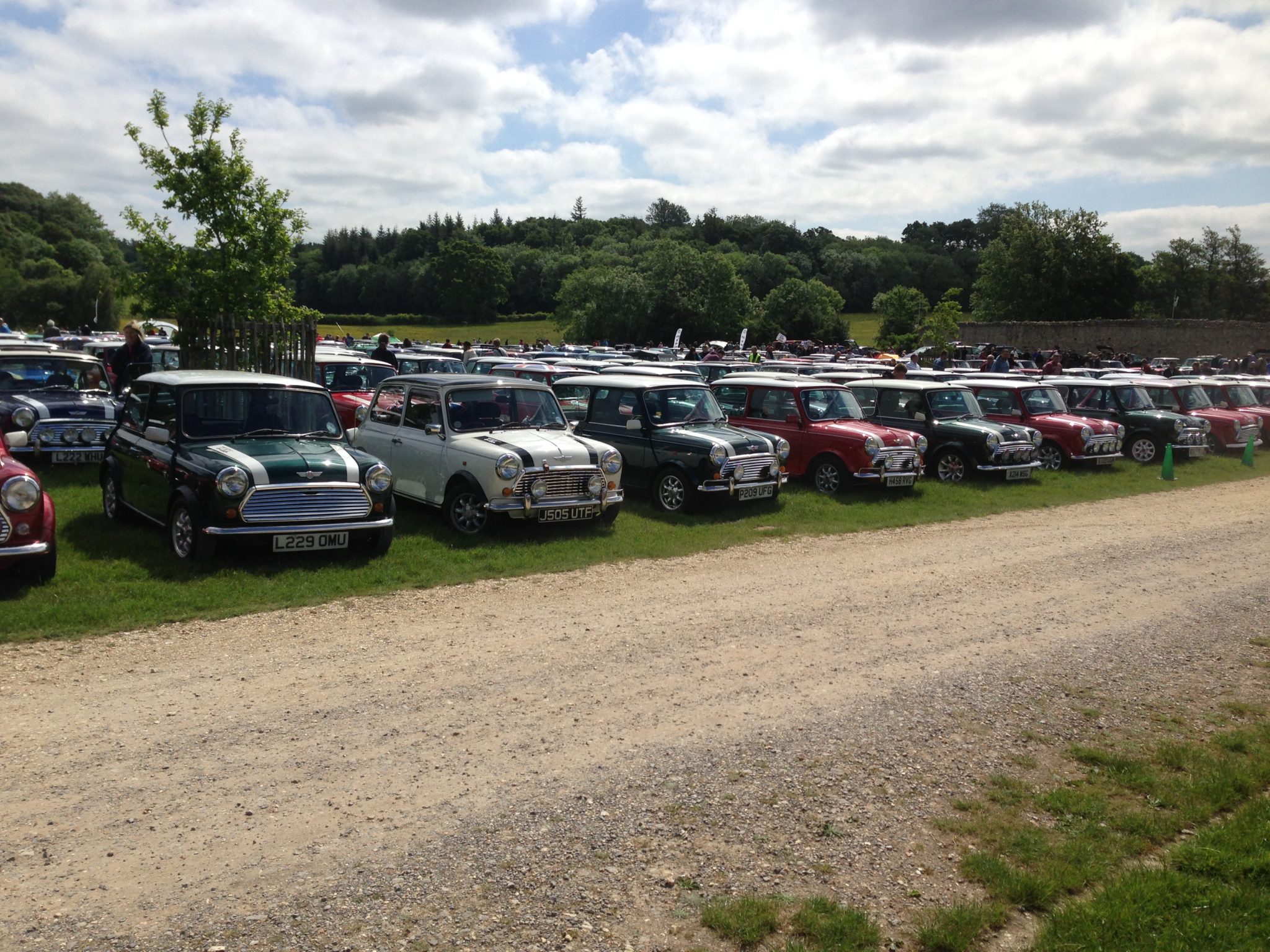 This is a year for celebration for Mini all around with 100 years of car making at plant Oxford and 50 years of the mighty Cooper S which won the infamous Monte Carlo Rally which sent shock waves all around the world certifying this small car as a performance marvel.

National Motor Museum at Beaulieu marked this special occasion and the aim was to bring together the largest gathering of 1071 Cooper S models since the first cars left the production line in 1963.

“All 1071 Cooper Ss are welcome and they will be given pride of place in a dedicated parking area by the main arena,” says event organiser Tony Salter.

There will also be a display of Cooper S models through the years from the earliest to the very latest MINI Cooper S.

Another annual Beaulieu attraction will be the rare collection of club members’ ex-Works and Special Tuning cars and coachbuilt classics from the likes of Radford and Wood & Pickett.

This another event I heard alot about by other members of Surrey new mini (SNM) and on my recent trip to Germany from motoring journalist Martyn Collins.

I did say its wasn’t a boring drive up as spotted two classic Mini Cooper S – one red and one blue which were in racing and rally spec. I gave my thumbs as we lined up together than I roared past them both to cut the air in front of them and to clear the path ahead.

I got to the meet point at the service but went on the wrong side so I was service maintenance side with no path to drive to link up with everyone. So I called in and headed directly to Beaulieu and waited for everyone to arrive so I could nip into the convoy like I was always there.

With me making the entrance staff laugh for a while the familiar MINIs and faces turned as skittles that are SNM arrived in convoy. I got my club stand pass off Neil and headed in with the convoy on the gravel path to the pitch on the grass for our MINIs to reside as we went around the grounds.

This is would be the first time I would meet Bert which is Ian’s classic MINI and who is our admin of Surrey New Mini the home of the most UK MINIs who have graced the most magazines, TV screens and international known.

Bert is a fine example of a classic Mini with its red paint with white stripes and under bonnet is a 1275 cc MPI engine, which was produced from 1996 to 2000. It was the last few classic Minis to be built before the reintroduction of the new MINI with the R50 in 2001.

Ian says ‘After owning a red Mini as my first car, I longed to own another again. I found Bert, and I knew I had to have him – he’s not just a car to me, and everybody that meets him loves him!’ You will meet Bert again shortly in a forthcoming post or might have seen him recently taking centre stage at an established automotive event called Goodwood: Festival Of Speed. Their something about any Mini that puts a smile on your face… All together with my little brother we headed out in pack of SNM members to check out the other clubs. There were a few interesting classic with the owners unique twist on them which made a nice change from all the immaculate tucked away examples which only come out during the show season. I think this one is ready for the winter warfare

If your up a gangster look, feast your eyes on this chopped roof Mini with Flat Beat Eric at the wheel

Here are some regular tasty examples of classic minis

We moved into the tented section where the show and shines were ranging from classic to modern MINIs.

As much as I love a perfect example of an immaculate car that still looks like in its original state when it left the factory. There is a point where this automotive examples are not DRIVEN and when I mean they aren’t driven they are lucky to see the light from the garages they reside from the 8 months of hibernation.This is a real shame and travesty to petrol heads as seeing a classic Mini always puts a smile on my face and its the reason why Jay Kay lead singer of Jamiroquai drives his collection of exotics all the time as he gets the enjoyment and so can onlookers to. http://www.youtube.com/watch?v=deKJRU6Zh0U I personally brought my JCW to enjoy the POWER and to DRIVE IT HARD!!! I tracked mine a few times and gone through 3 sets of tyres, full set of discs and pads. I have chip stones on the front end and side of my JCW but all these marks add character that this machine that is driven and taken to its owner and car limit yet my JCW still draws a crowd at shows and intrigue from people seeing and hearing me coming on the streets.

After some chit chat amongst ourselves we headed over to see my favourite automotive creation which I had seen on TV. Your probably wondering what I am on about but it will all make sense when I say the show included a tall loud man obsessed with POWEERRRR, another guy who is slow and has no sense of direction and little guy from Birmingham has white teeth and loves his Porsches. If you haven’t guessed what show I am taking about then you need to re-evaluate your life as you should know I am on about TOP GEAR!!! All of TOP GEAR wacky creations from all the seasons where on show from the reasonable price car to the infamous Toybota which crossed the English channel into France. Here is Top Gear’s personal take on an old person car

The snowbine harvester which destroyed a small town in Norway

The convoy of British motors to India

Oh no its the Top Gear Rozzers

Time for some famous UK mini which have graced our TV screens for generations to adore and smile at and which formed the basis of my childhood laughter and my passion for anything with a steering wheel and a gas pedal. The loveable Brum, Mr Bean’s classic Mini and Del boy’s reliant robin

On a short note I pestered my parents sooo much to buy a car like BRUM and I wanted him as my first car (I smiled for a while when I saw that car so many found childhood memories came back). Then we all moved on to the Beaulieu’s motor museum its crown jewels which houses collection of over 250 automobiles and motorcycles telling the story of motoring on the roads of Britain from the dawn of motoring to the present day, the award winning National Motor Museum appeals to all age groups. From World Land Speed Record Breakers including Campbell’s famous Bluebird to film favourites such as the magical flying car, Chitty Chitty Bang Bang.

There are alot of ground breaking automotive legends housed here so I will allow you to enjoy the pictures. Who are you Sir? Bond, James Bond was there to show off his collection of motors which would see Q happy as they weren’t wrecked

Personally my favourite Bond is Pierce Brosnan given his look and the way he carried himself and the best shake and not shirred moment for me was the car chase in Tomorrow Never Dies car with BMW 7 series.

Next up was the magical world of automotive history on a four seater kart which showed you how automotive industry developed through the ages. Lets say its good if your about 5 and I wish I had a gas pedal to make it go faster lol Everyton Seena’s F1 Honda with Manual gearbox

Woke up in a Bugatti

Yes I know this a MINI website so don’t worry about the lack of Minis but I am petrol head at the heart of it all.

We departed and jumped onto the magnetic rail which was the slowest thing I have ever been on but it was at the end of the day so meh. It was another great day out with the SNM Club plus there was Ice cream so I was a happy chappy.