My 2nd family is Surrey New MINI and when call to ask me to come down for a MINI Event you bet I am coming. But this wasn’t a normal SNM meet but a MINI Vines Gatwick event for the yearly event called Horsham Piazza Italia.

This annual event takes place in Horsham Town Centre on three days over the Easter weekend and offers visitors and shoppers to Horsham an exciting taste of Italy in the midst of a very English medieval market town. Packed full of fabulous cars and bikes, tasty Italian foods, lively street entertainment and a huge choice of independent shops, cafes and restaurants – Piazza Italia is fun for all the family!

We would taking centre stage on Saturday in Horsham town centre and we were allocated 100 space for all our MINIs I head down to London on the Friday to stay over at my cousin house and i thought driving my JCW in Birmingham was bad!!! There were the mother of all potholes, speed bumps and undulations within the road and my JCW isn’t even lowered and I was struggling not to make it scrap!

I recent put the sports cat on my JCW so it was quite loud but more so much amongst the concrete jungle that is London. I was getting onlooker fascinated the looks of my JCW and the noise it made through the 1st, 2nd and 3rd. I can see why a friend of mine gets 18mpg out of his JCW given all this start stop traffic. 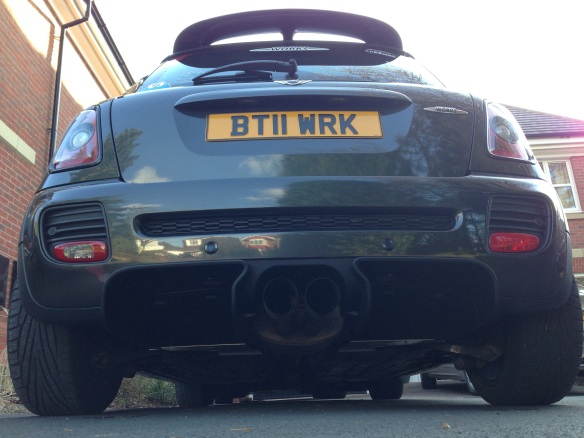 Lets not be all doom and gloom, it was nice seeing my mum’s side of the family up in London. My younger cousin wanted to come along with me to the MINI event as bit of car nut like and he is always telling his mates about my JCW. I wanted to give him some pictures and videos to brang about at school.

It was a nice change not driving a million miles early in the morning and driving through London city I must woken up a few people as we rolled through London’s tunnels and narrow side streets. The closer we got the dealership the more minis we spotted a few familiar MINIs from our club and they were driving in convoy so I accelerated and nipped in between them. 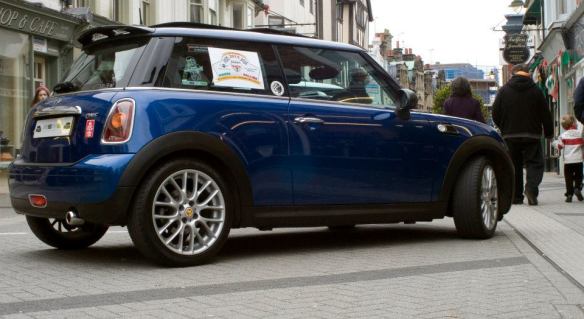 I caused quite a steer at the meet point as everyone could hear me coming and this DINKY blue thing was in my rear view ; ) I had sure they hear the backfire on the overrun as I lifted off the accerelator

We drove into the dealership carpark and soon filled it up MINIs leaving us to wondering where everyone else would park. We headed inside for our goody bag and door vinyl for our MINIs. 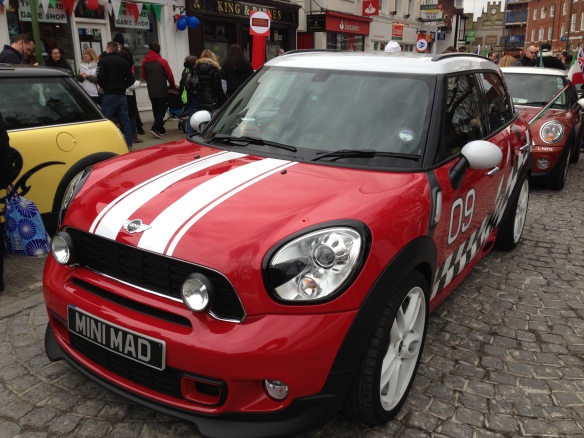 Dave in his Olympic Edition MINI

There must have been easily 100 MINIs there alongside classic ones which is very unusual sight given we were at BMW/MINI dealership all chatting together. 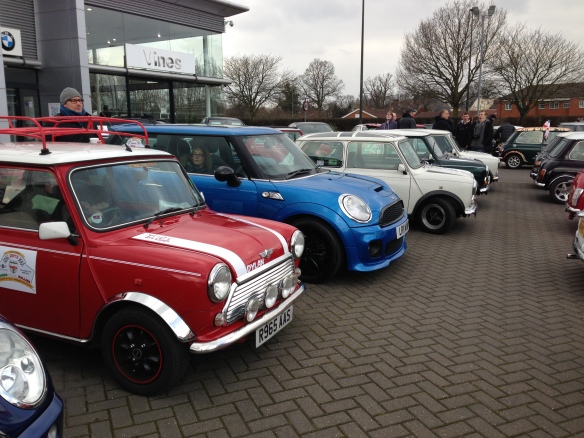 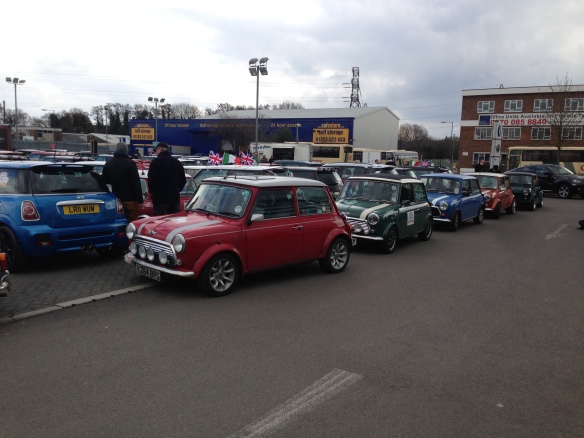 Even thought it was very cold this time of year in March it was worth seeing both classic and new minis people getting on. I grabbed some breakfast with wifey number 1 Christine whilst my cousin and little brother were blowing their brains out with all the minis present.

Garry decided to arrive at the last few minutes before we handed out which was ironic as he brought along his factory fresh GP2 the fastest MINI buy can buy. I bet he did it to show off to everyone!!!

All done with the poser and his GP2 we all headed out to Horsham town centre with a Police escort. Yes i did say police escort, they were holding up traffic for us and waving us through red lights and whizzing ahead on bikes to block traffic off for us. 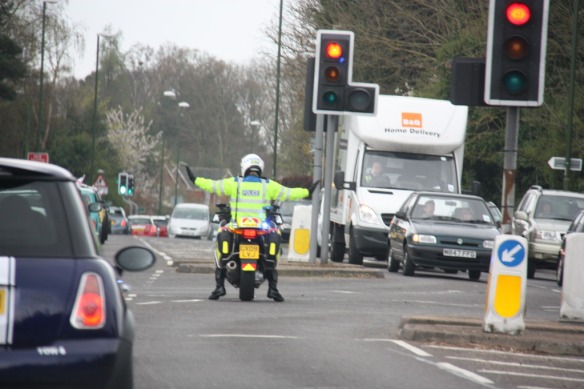 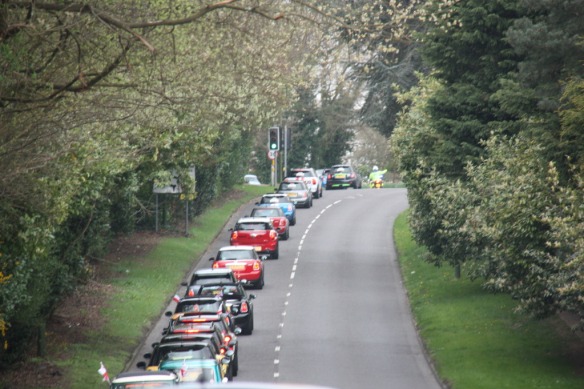 We managed to get both a GP1 & GP2 together

It was a really busy day with alot of families out enjoying the event and looking at all our MINIs. But it was a little nervous knowing people would be touch, brush along side it and walking around my JCW whilst I was away from it.

I finally got dragged away by little brother and cousin and showed them around pointing out all the members i know and introducing them and point out all the models and details on each MINI we saw.

We had a spot of lunch with GP Garry and asked him how he was finding owning a GP2 and the livability of it all. Most of his answers involved the word UNBELIEVABLE with him saying I remember taking this corner in my WC50 at this speed but now in the GP2 I taking it 15 – 20mph quicker!!!

The event was coming to a close so we headed back to our MINIs and waited for all the classics to leave in a parade as they were being let loose first to onlookers gathered along the Horsham streets. It was nice having people waving and little children being all excited by the departure of all us.

Once we were let out I made sure my JCW gave them something to remember me by letting a few Pops & Bangs on the overrun. 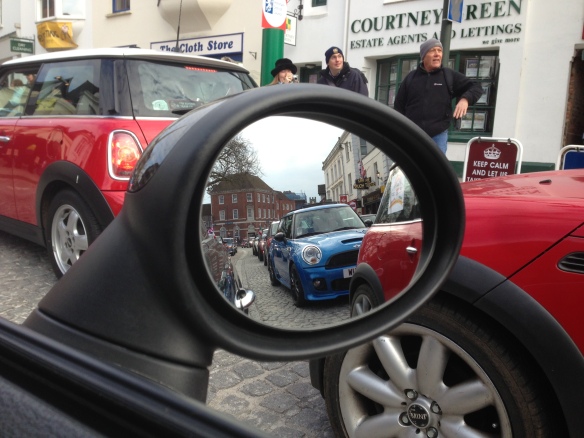 I waited for GP Garry to arrive as he wanted to go for a little hoon around the back roads. It was great fun playing between us on the backroads as we keeping braking down to its bare minimum and carrying the speeds in the corners. But GP2 was better sorted and the GP slightly left me at the roundabout : /

It was great fun as always with the SNM crew and I would be staying in London longer as I had a wedding to attend the next day so London had to put up the sound of the Birmingham Beast living it all up. My JCW gave my cousins E92 M3 something to quite down abit after I gave him a rev off ; )