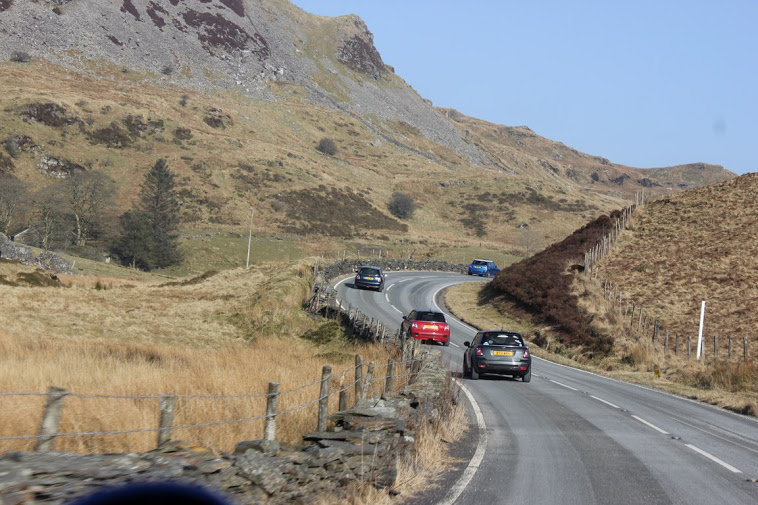 My JCW faired well in the snow with me driving it everyday in -5 degrees weather on normal tyres. She started first time, defrosted quickly in the morning and passed a few cars doodling at 15mph with a few pops & bangs in the snow : D

I feared the worst I thought I had bent the rear control arm or suspension. Off I went to the MINI Accident repair centre to get my JCW assessed. She is tough one but my suspension was out so a full KDS Alignment was needed.

What is KDS? Kinematic Diagnosis System is where by MINI punch in your Chassis number into the system to pull up the full specification of your MINI including all the options installed. They will set your suspension back to what it was at the factory and alter if options are fitted later down the line that will affect the balance of the vehicle. Therefore all MINIs have a different setup to each other e.g. a MINI with a sunroof will have a different alignment to one without.

It was well worth the £120 as the ride and handling was transformed and it felt even sharper. Hats off to MINI Oldbury Accident Repair centre

Enough doom and gloom!! Back at MINI UNITED 2012 i met this MINI couple – Rob & Liz and members of Merseryside MINI club who were a great laugh and discussed the GP 2 at some length. Rob talked about the route including the Stevalo pass and driving through the Alps and that he would heading the Nurburgbring in his WC50 shortly after MINI UNITED.

Rob told me about his club and wanted me to join in with their fun so I signed up for My 1st Run of 2013 would be the Dragon run which included the infamous EVO triangle. He let me know on a little secret of his that his WC50 would be traded in for GP2 so I was happy to see him & Merseyside crew again.

As always the JCW was made Shiney Shiney the night before and fuelled with Shell V Power and I headed to North Wales for the dragon run. The meet point would be a service station with plenty parking and places to Nom Nom breakie.

A few minutes later Rob & Liz came in his new GP2  with Rob saying ‘Hey Ali, Nice seeing you, I would love to give you a lift but I have no back seats’ LMAO

With everyone together we headed to the Great Ome, Llandudno

DJ with his 1st Gen GP

It was like skittles on the roads with virtually all the MINI colours and UK flag being drive on the roads. I say the road were amazing because they dipped and corkscrewed up when you come out the bend just like on the nordschleife. This reinforced especially when your chasing the MINI up front pushing them on to brake that bit later and get on the power sooner

I was grinning ear to ear appreciating my recently dialled in suspension with the JCW popping like MAD on each gear change. I managed to get pop on every change up to 5th  and i never heard my JCW  Pop & Bang so much EVERRRR!!!!

I went into a cafe to get my lunch and tried to the vegetarian option which was chef special of vegetable pie with salad and handcut chips with real lemonade. I have to say it was very nice and filled me up nicely

They had been on a fair few MINI adventures with the GP and I was shocked to hear that the GP was their wedding car as well as the drove into the sunset for their honeymoon. Proper MINI die-hards with the GP winning a few concours awards and being in a few official MINI UK events as well

We all headed out to the infamous EVO triangle only to turn around 2 miles down the road because a local had crashed their car. It’s an reminder that you should always obey rules of the road and be sensible with manoeuvres and your spatial awareness as all it takes to think is 2 seconds and 1 second for it be game over.

We looked at the funny thing paper called a map and searched for a route we could go on to headed in the direction of the EVO triangle.

I am sure if going the other way would have been as good given I was in awe of the mountains, scenery and the epic winding asphalt as I managed to get some motion shots of all us heading into the mountains

When we got the EVO Triangle  we all parked up on the side to see a Frozen Blue M3 Performance Pack & Black 1M Coupe howl by. We all know why they came her for some proper Hoonage on the best roads with the UK

The EVO Triangle’s name comes from the writers over at the EVO Magazine. This route is what the writers use to test drive the cars for magazine features. The route has become very popular among driving enthusiasts, and seems to be one of the most talked about routes in the UK. The route starts on the A543 (just off the A5) heading North along tight sweeping bends and great scenery. You will then turn right onto the B4501 which takes you on some nice long sweeping bends with views of the Llyn Brenig Lake. This road then leads back to the A5 (going through the village of Cerrigydrudion) and back to where you started.

This perfection of asphalt is 20 miles long and ribbons like a dragon through the heartlands of North Wales with a steep inclines with tight challenging turns to work your suspension with every turn, torture to your tyres to limits of grip, boil your brake fluid and for you thirst after every gear shift to connect every turn with the exact steering and throttle input all of the feeling that I tamed this tarmac beast.

I have never been so focused and enjoyed a road so much within the UK and it was petrol head nirvana with me lynching for more! Constantly trying to get the racing line and getting the front end to kiss the apex coming in and out the corners.

It was challenge to keep up GP 2 as I could clearly see that he could get on the power much more earlier than me with the Kumho Ecsta V700 gripping the tarmac like claws and the Bilstein Coilover suspension eating up all the undulations like it was nothing with no visible sign of body roll at all. Plus he could get on the brake much later as those colossal 6 pot Brembos scrub the speed away at neck breaking force.

You clearly see the GP 2 has been setup dead on with its damping, rebound rates, braking and doesn’t waste any of the power from the engine which just goes to show power isn’t anything if it can’t be used

Later on the route I had to back off as I was getting brake fade only due to the fact my pads and discs were due in 2,000 miles so there wasn’t much bite left in them

When we finally came to a finish I was astonished by this piece of asphalt as my hands were sweaty, my pulse was racing and my pupils dilated. I felt a sign of accomplishment that I had come here and conquered that dragon of tarmac with my JCW pinging on cool down with the cool fans kicking in with added smell of brake pads.