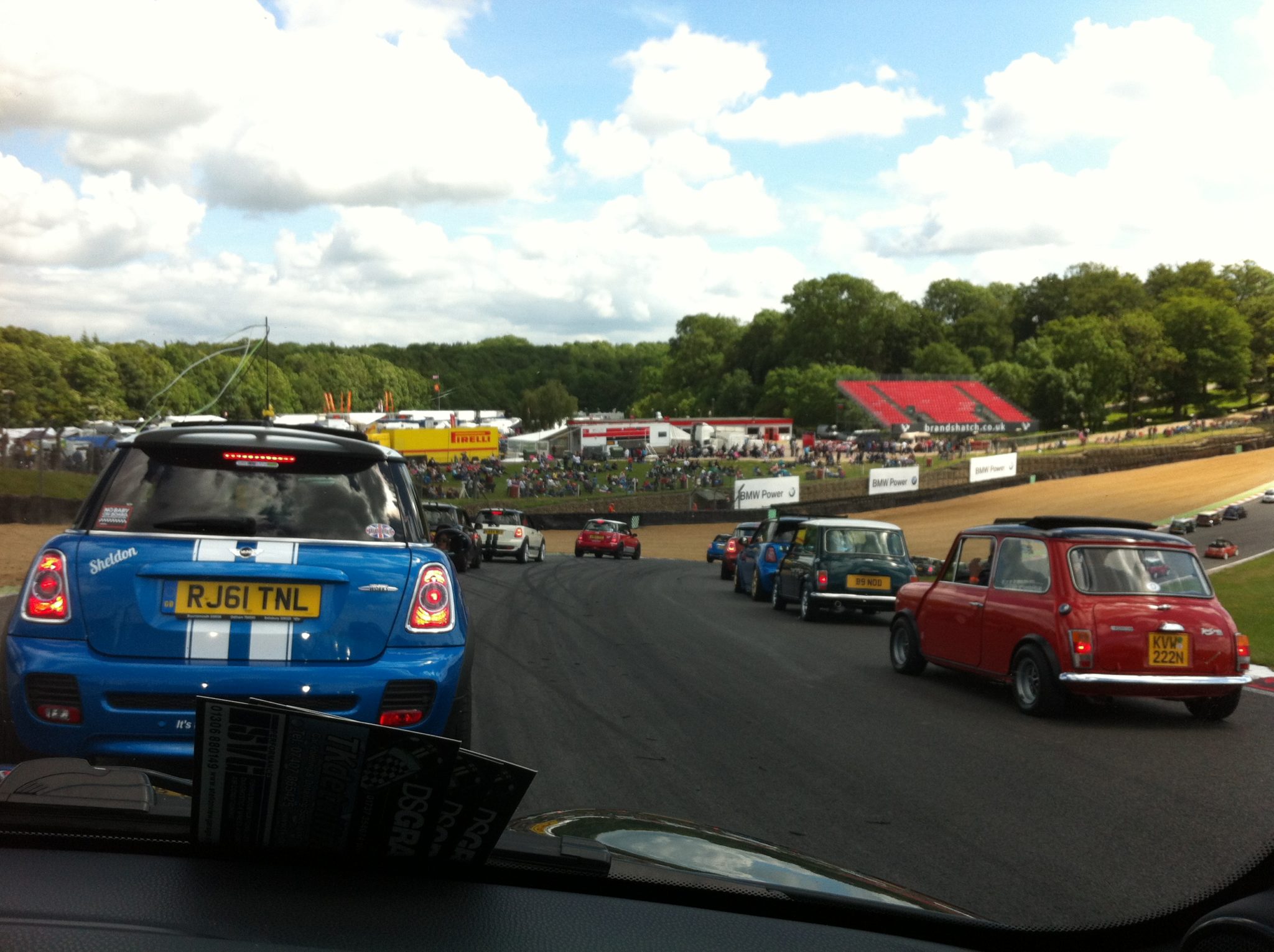 Fresh from MINI UNITED this would be my 1st MINI with Surrey New MINI Club at the Brands Hatch Circuit.

I was told this was a MINI Festival for people who didn’t go to MINI UNITED.

This would be my first time at the Brands Hatch circuit and this track has a legacy behind with F1, WTTC & BTTC racing through out its history.

I looked on Youtube to see the track layout before I went to see where the racing line, braking points and where to push hard or back off. Learning a track is key to driving safe and fast without causing damage to your car or others on the track.

I was interested in seeing the ‘Fast Five aka The MU Gang’ and introducing everyone to my little brother (Adam).

We met up with SNM to go as a convoy before we drove down as club to brands hatch as we had a club stand.

20 MINIs strong we headed to Brands Hatch all in convoy grabbing looks and waves as we drove down to the circuit. Its one of things i love having a MINI and being apart of a club we always stop traffic when we roll up.

We all ushered into the circuit and officials showed us to the club stand. We put up our Club flag together and got to meet the few characters in the club.

Paul with his Tuned Cooper S with Evolve Hybrid Turbo

Jelster (Steve) with his Eclipse Grey JCW with a Red Top

Smiles and jokes where had with the SNM crew again and meeting the members who i only spoke to online.

I saw a few tasty MINIs whilst i was there, in case of this Chocolate brown JCW Clubman which must be expensive made to order one. I remember i wanted the White Silver paint on mine at the time of ordering mine and MINI wanted another £4,000 (White Silver is now an option on JCW now for £500).

MINI Craft brought their bonkers R53 Time attack which was pushing 300BHP at the time and set a time of 11.6 Second at 123MPH at Santa Pod.

McLaren MP4-12C with a nice numberplate

We continued looking down the paddock for me to shout like a star struck girl when I spotted Chris Harris (Former EVO magazine writer, Online blogger and DriveTV showhost). I have always loved the way he wrote about cars and they way he Hoons about in them especially AMGs. I have a soft spot of the V8 Burble and the looneyness of the AMGs Ethos of POWWWWERRR!!!

Even though he was busy preparing his Radical for racing today he took the time to talk to me and take a photo with me. It was much appreciate meeting a living Legend and Idol of mine – It made my day : D

With me still all star struck we went to watch the GT3 class race around the circuit on the bank curve where alot of overtaking occurs due to its high speed nature of this corner following the back straight away.

There was good battles going on during the races with the Porsche GT3 RSR being down on power from the rest of the field but this keeping its own with the Ferrari 458 & 430, Mosler and Ginetta race car.

Next up the Classic MINIs came up and there was some few crazy moments with a few going off and one crashing. You could see the MINIs were being pushed as you could see them hop on the banked curve and the odd lock up of the brakes.

With the racing all done, we went down to see the other club stands and spotted a Cooper S from the Netherlands with the Fully JCW Kit fitted with brakes, wheels, JCW tune, Red JCW side stripe, Black Line Kit and Challenge R1 Wing (GP replica).

Next we lined up to watch Russ Swift do this thing!

Russ Swift is Synonymous with Handbrake turns, stunts and MINIs. He is a bigger promoter of the brand and the car and many of his stunts and records have been done in a MINI.

He put on an amazing show bringing the two cars closer and closer to do handbrake turn in between and at one point there was just 40 cm in total from either of each car.

I was amazed by the last stunt he did by putting a Cooper S on two wheels and driving a FULL lap of the Brands Hatch Circuit!!!!

I managed to speak with Russ Swift at some length and I am still amazed I got to speak to him. He was more than happy to take a picture with me.

After seeing all these Classic MINIs I wanted to start a saving pot for a classic where I would buy a unloved and build it back to its original states with a few modern upgrades here and there.

Another Modern MINI Magazine star was there at the show with the R53 Speedster being present with Two seats and bubbled rear with Roll Bars.

My little brother is quite the car enthusiast like me and can name most cars within a flash. He wanted to put some laps of his own after I went around in my JCW on the parade lap. He jumped into the F1 Simulator to try his hand at F1 Superstardom and lets say there is some promise there.

This was my First outing with the SNM which was the 1st of many future events.

Next meet up was MITP at Santa Pod