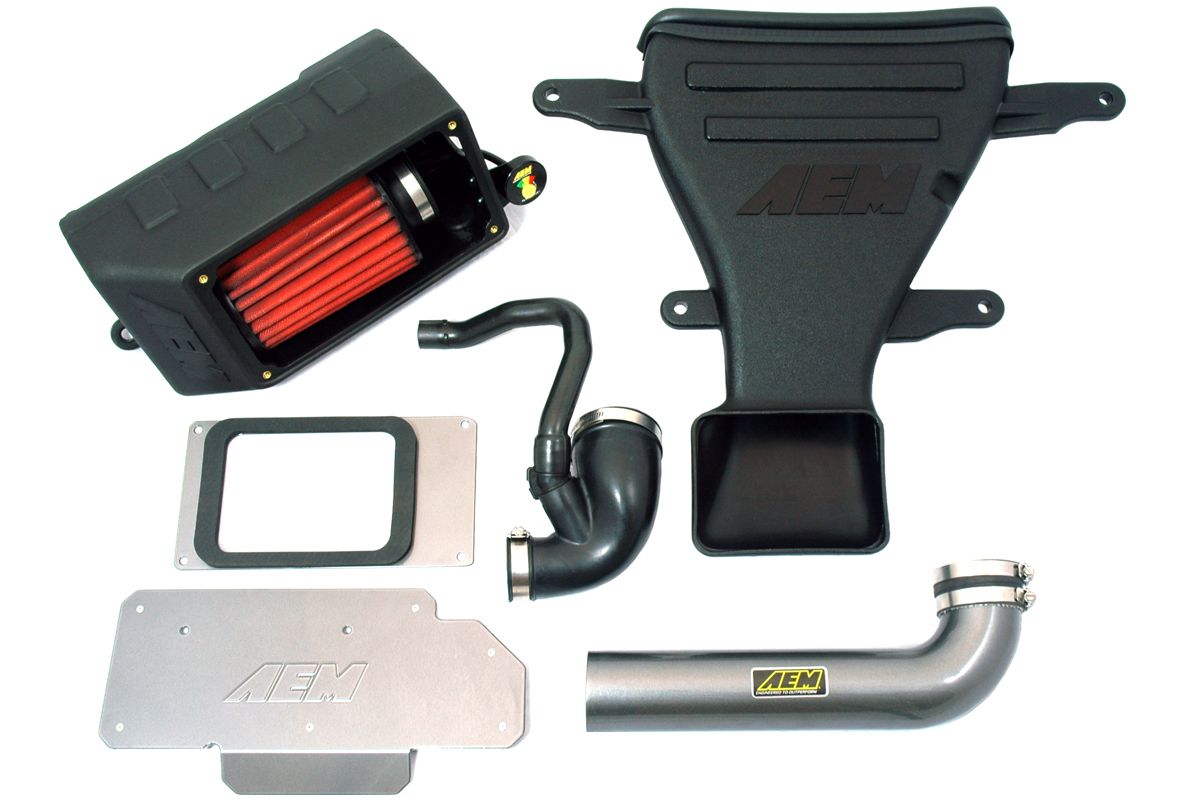 There is an old saying ‘Power Corrupts’ which is true. It is most prevalent in the automotive and modding world. The world of tuning has evolved drastically as ECUs, suspension, electronics, materials, aerodynamics all play an important part in the pursuit of power and speed.
This is where AEM steps in, a California company founded in 1987 around the California car scene which is notorious for its illegal street racing. The AEM has been synonymous with ‘Import/tuner’ cars and worked very closely with Nissan, TRD, Honda because of their R&D skills gave birth to the first packaged air induction kit.
Here is are few first by AEM:

AEM took it upon themselves to develop an R56 MINI Cold Air Intake given the MINI community in the USA plus I have funny feeling one of the staff has an R56 MINI.

AEM cleverly worked out to utilises the non functional scoop on the R56 MINI Cooper S & JCW which was carried over from the R53 Cooper S because of aesthetics. The position of the intercooler and air intake in the turbocharged R56 doesn’t require cold air to pass over the engine like in R53 as the intercooler was position above the engine.
The principle of a Cold Air Intake is to increase the cold air volume coming into the engine as colder air is more dense as it carries more oxygen per volume unit than warmer air thus creating more power. Aftermarket intakes often replace the ‘restrictive’ factory airbox and air filter to give you better performance and better engine sound. They normally relocate the air filter outside the engine compartment so cooler air can be fed into your engine. Cooler air carries more oxygen, which translates into a more intense explosion in the combustion chamber for more horsepower and torque.

This modification does harm the engine as your just giving the engine more of what it wants OXYGEN as the ECU will readjust as fuel to air ratio to account for more air flow. However some cars will gain more power if they are naturally aspirated or either turbocharged/supercharged but the gains have to be 10% and above to be felt. On older cars there is noticeable difference as the air flow management didn’t play a significant part in the car’s production therefore often is pre 1990 era cars will see significant gains in power across the rev range as well as MPG gains.
The interwebs tell us cold air intakes and pod filters actually work but more cases than none all they do is actually make the car sound better rather than producing more power. But like always on the internet your butt dyno or armchair mechanic status doesn’t count and we want videos and dyno sheet read outs.


This is where the guys from Might Car Mods have tried and test multiple intakes and filters to see what actually benefit they make using a variation in cars etc. I have been a mighty car mods long time fan since I saw their Turbo & Temples feature film which I stumbled across when I was looking at R34 GTR videos (remember I am from the ‘Playstation Generation’).
Here is the video in question

I was abit wary of the AEM Intake given I had watched these informative videos a long while back as modern exhaust and intake modifications bring no gains and only bring more noise than stock as the ECUs are not calibrated with all components attached around the engine performance. I personally know this is true after I installed a 200 cell catalytic converter on my JCW and saw no real gain in performance and just a smoother power band and with no flat-out at the top. However the JCW does sound biblical on the overrun and pops & bangs are now artillery fire which is why I back off going past any Prius : p
It was another trip down to MINI specialist Lohen for this fettling as there are only two places who I trust my JCW with and Lohen is one of them. Lohen supplied and fitted this kit to my JCW which will house perfectly in near OEM fitment after my factory JCW airbox is removed. The AEM Intake system was designed is a DIY kit – instructions, pdf file and video installation are available on their website.

This install took about around 2 hours as injunction with having the AEM strut brace because JCW strut no longer fits around the AEM airbox. I was impressed by OEM likeness of the kit as it fitted within the engine bay like it belongs and the heat shield fits perfectly over the turbo along with the air scoop fitting snug under the bonnet. I loved how the colour of the strut brace and intake tube matches the colour of my JCW  #ColourCoordinated.
Sadly at the time I couldn’t get my JCW on Lohen’s dyno as it was out of action but first impressions sounded good as the JCW exhaust burble at idle was little different with a blip of the throttle giving a sharp induction noise with more audible dump value noise. On the way home I noticed the better throttle response along with more power & free revving engine at speed with a noticeable difference at the top end. My JCW definitely felt like a different car after the install as the journey home from Lohen on the motorway is 30 minutes. The pick up is just ballistic as this newly added power makes the temptation to go even faster on public roads ever so easy.

On the strut brace front there wasn’t any more stability compared from the AEM strut brace to the JCW one but its competitive priced to the OEM option so the no comprises have been made.
Sadly at the time I couldn’t use their dyno as it was out of action for maintenance. But that said they have all my previous dyno runs on file so it will interesting to see what she is making as my JCW is due a long-awaited trip again for some more mods…
All the data proved by AEM along with other certified sellers confirmed the performance gains
AEM – 2010 Cooper S – 14.14 Bhp gain

Looking past all the gains what does it sound like? How has it been to live with? Any pros and cons?
The induction noise is a welcomed one as I am sucker for loud noise which adds to the aural sensations of speed. I had the intakes installed in December 2013 and driven 15,000 plus miles in that time which no real issues to the intakes besides losing two bolts from the metal housing frame of the airbox which was down to engine moving. This issue was solved with washers and locktite and AEM kindly providing me with some spares for free after an email.
During this time I haven’t seen the air filter get visual dirty or anything get stuck in the air box. My JCW is my daily driver so whether it has been a bitter winter or blazing hot I haven’t felt any drop in performance from the intake. Another question I have been asked a lot has the intake sucked in water? Simple answer is no as I have driven my JCW to London which is about 2 hours away in torrential downpour at cruise control guided speed of 60 mph only to find the filter and airbox bone dry which still amazes me to this day.

Another benefit of this filter that is used in the intake a dry flow air filter meaning it’s not oil based meaning no maintenance of reoiling etc. Most modern cars including MINIs have a Mass Air Flow (MAF) sensor it is best to use a dry air filter as the oil based filters cause damage to this sensor resulting in malfunction with increased emissions and damage to the catalytic converter. Oil based filters are only better at maximum flow passing through to dry but don’t give a better filtration than a dry filters. The filter used in this kit is actually a K&N filter so there are no worries on the quality of the filter.

On a maintenance side I haven’t need to do anything to any of the intake parts or filter minus the missing screws on the airbox which minor grumble in the grand scheme of things. You might wonder when do I change the air filter? There is a filter minder indicator which has 3 colour zones of green, yellow and red indicating the life of left in the filter. As this is a K&N filter all that is needed to clean the filter is K&N filter cleaning spray and warm or cold water at around 50,000 miles. There is an optional filter wrap available for dusty or muddy regions to prevent any dirty etc clogging up the filter with little affect on the restriction.
[youtube=http://youtu.be/shYSbwdFMno] A very strange but welcome benefit of the intake has been in the increased MPG with long runs easily taking my JCW into the 50 mpg range again at cruise control guided 60 mph (I tend to cruise and let my JCW do its thing whilst I relax to music playing on my HK system all racecar like in my Recaros).
The only negative I have ever seen of this intake is in hotter climates where the heat from the engine and turbo has been reflected which resulted in the value cover melting but this has been insulated cases with wrong installation with the stock heat shield being completed remove. Another one was with a tuned S doing track days in high heat which is another case for debate as tuned S will always give off more heat that stock. If you are that worried you can always take off the AEM heat shield and protect the air duct by adding on engine heat reflector wrap on the duct to stop the plastic from melting (that’s just my two cents).

I have tracked mine with the intake installed and experienced any of the above problems but the UK climate is a lot milder and my JCW is running its stock with just a sports cat. On a side note I have installed the GP2 front undertray which actually cools the engine bay temps but at some point I will upgrade to a bigger intercooler for added cooling.
In summary I can not fault AEM’s Cold Air Intake given the quality of item and increased performance gain from such a simple means with a need for drastic modifications or fiddling with the ECU. The AEM does exactly what it claims with no down side besides the cost as the time of my install the whole kit along with strut brace cost me £430 but since then prices have increased. The kit could be at £200 for the N14 engine and strut brace at £200 but prices are £340 which is a big jump of 70% in the space of 1 year which makes it hard to justify given you can get your ECU tune for that price. However in my opinion a guy with a laptop doesn’t know better than a full team of engineers who have tested the car and its capabilities in every conceivable type of driving, weather conditions and climates to give you the customer the best driveable car that starts every time.
Review Score: 9/10
The AEM Cold Air Intake delivers on claims of increased performance in OEM like quality & fitment in a DIY Kit form
Comment, Like, Subscribe, follow or donate
Facebook Page
Youtube
Instagram
Twitter
JCW ADVENTURES Store
Like what you read and want to support the site? Please donate below: