MINI TO THE MAX at Goodwood Circuit 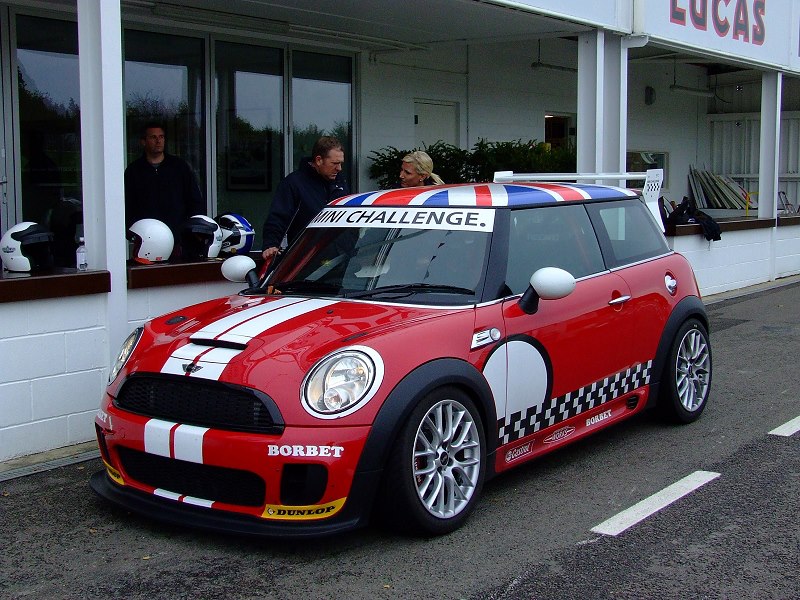 MINI UK had a competition to win a chance to test drive their cars at Goodwood Circuit and track your own MINI. I jumped at this opportunity hoping that i would get a slot. Who wouldn’t want to trash around some MINIs for a day for FREE!!!!!

I was selected for this invite only event : D

So the night before I filled her up with V Power to the brim as i knew it would be a long journey.

Dawn broke so i get ready for this event as it would be a 3 hour drive for me (164 miles).

Got to Love UK Motorways and that was just the beginining of it as hit numerous speed limits zones ranging from 40mph to 60mph : (

I had finally got out of these dreaded zones to be greeted by the New Aston Martin Vanquish joining to the motorway and lets says he wasn’t observing UK speed limits. I managed to keep a chase to shoot some footage of it

It sounded really naughty n fruity and it was shifting, easily going over 100mph

I hit London to be greeted with more speed limits and my first time ever seeing a broken down MINI on the slip road : (

BT11 WRK at Goodwood for MINI TO THE MAX

I reckon my JCW looks meaner without a Front Plate

I walked into the Goodwood booth and was greeted by MINI UK and given my wrist band for the event and some paperwork to fill out due to safety and insurance policies by BMW/MINI.

This is where i met the lovely Ysabel who had been with MINI since its launch in 2001 under the BMW Brand and she has had 53 MINIs!!!!!!!!

I am actually jealous of her, I think she needs to share with ME!

I knew Ian, Neil & David (Surrey New MINI) would be at the event to which I bumped into them upstairs as they watched the New GP zoom past on the circuit on a damp track.

The Goodwood track was actually an airbase/runaway in WWII hence the long straight of the circuit and the reason why it Kinks sharply because if a bomber came down and bombed the runaway full of planes some would be saved because the sharp turn.

The Goodwood circuit has claimed some lives in its time and ended Sir Stirlings Moss career 1962 on that very bend I spoke about. The Late Carroll Shelby made his mark on this circuit by winning here in his infamous bib overalls

But there was an cheeky little note under the mini MINI

I walked downstairs to see this beauty the Pre Production MINI GP as it would when its sold to the public – well 2,000 lucky people across the globe

I jumped into MINI’s Coupe Cooper S and headed out with an instructor who guided me through each bend to see my level of skill and learn the circuit at the same time.

I learnt that I turn in to early and I need to position my car slightly more close to edge of the track before entering. It is always better to go in slow then go fast out and that I should be eyeing the next corner to get my line straight as possible to get a faster lap time.

This was actually the first time i have genuinely been scared on a track given that i been on Silverstone, Paul Ricard Circuit, Monaco circuit and Castle Combe. I was hitting 120mph on the straights and carrying 80mph into the 1st corner with half throttle!!!

Goodwood is flat aerodrome circuit which makes hard to race around as there are no reference points, no run off and its incredible smooth and flat. If you enter or mess up a corner its the barrier as its the track and a little bit of grass then a metal barrier with a tire wall filled with sand.

The next treat was jumping into a MINI Challenge race car again  : )

This time i was female driver – Tiffany Chittenden at the wheel with some serious pedigree behind her (GT3, Karting, Formula Ford and Mercedes World Driving Specialist)

Once again like at MINI UNITED I told Tiffany Dont Hold back and just go for it!!!

On an interesting note the Challenge Racecar couldn’t overtake the new MINI GP on the straights but could late brake the GP and overtake on the corner but the MINI GP wasnt too far behind!

Ian and Neil got behind of the Most expensive MINI ever made the Goodwood Edition at £40,000

I gave Ysabel my Infamous Hat to wear whilst i went around in the GP for safe keeping. She was rocking the look very well, if I do say so myself

Next was my favourite bit of the day with Steve of MINI taking the MINI GP around flat out and he could DRIVE.

As I went around in the passenger seat I analysed how the GP was riding, cornering and picking up its speed and comparing it to my JCW. I didnt like the new recaros for the track compared to my bucket ones as i was actually slipping out of them slowly.

However those Kumho Ecsta V700 R-Spec tires were doing their job around the corners and the suspension was firmer than my JCW but still giving. They helped flat cornering with the car feeling stable any speed on the straights and in or out of corner. The GP definitely felt faster than my JCW with it comfortably reaching over 130mph on the straights.

THE BRAKES just worked effortlessly with Steve breaking very very late and the speed just been scrubbed like in the Challenge car. The Six pot calipers even fad after all the laps the GP went out on quick concession (The GP was driven to every Inch of it Cylinders).

After that I wanted a GP!!!

Previous Gen or the New one, I would be getting one as my 2nd car

The saving pot has started!!!

After some afternoon nibbles and some water

Ready to take it to the MAX

Crash helmet on and instructor with me i headed out on a empty track all for me : )

I said to him ” I know how my car handles and i am happy to it the MAX because its the reason why i brought it, I didnt buy a fast car to drove it slow”

Phil was impressed by how much better i drove my car and he told me i felt like completely different driver. I took on Phil’s advice about improving my track technique and i will apply it again soon because it made sense when told me to let go of the steering wheel at 60mph and he turned it in to show how turn in a bend which i found abit tricky.

After all this MINI Madness, we were all brought in and given some FREE SWAG

Arriving at MINI TO THE MAX at Goodwood – http://youtu.be/cNp9siekNHo

My JCW on the Goodwood Circuit – http://youtu.be/lFpkFZpmTB8