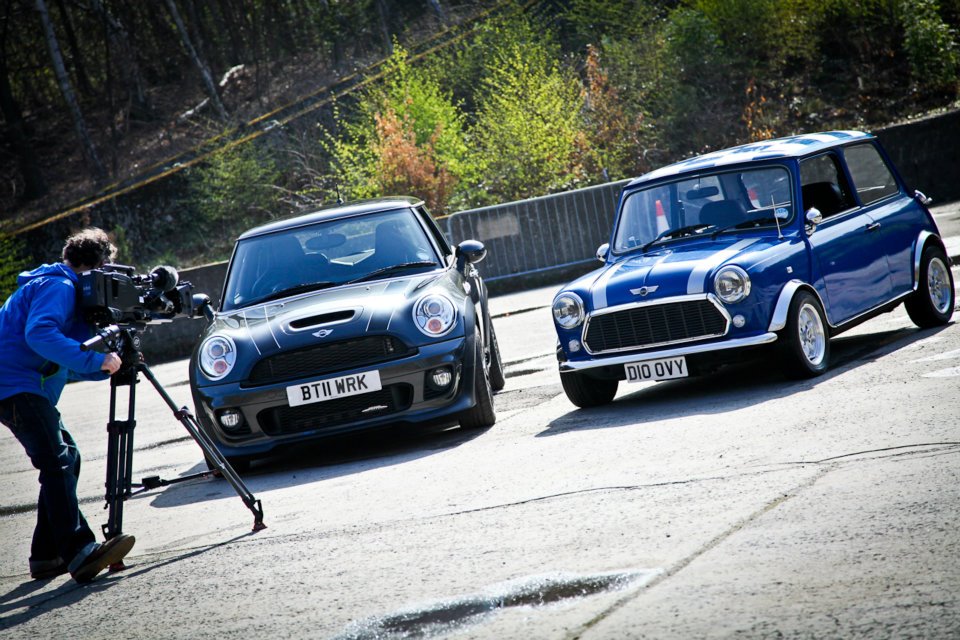 I found out about this TV Shoot on the Totalmini forums – Attaboy Productions needed a New MINI & Original one.

I was selected from numerous old & new MINIs and i was invited to Chobham Test Track in London where Autocar test drive cars and do their 60 seconds Video reviews.

Alot of high speed testing happens at this track as well as lot of TV & film stunt scenes – The most recent being for Top Gear & the new Bond Film Skyfall.

I cleaned, polish, hoovered and cleaned the engine bay for the TV Shoot and sent off from house over 120 miles away. To my luck it started to rain heavily – Thank you British Weather.

I arrived at my hotel which Attaboy TV provided for me.

The next day I sent for bright and early for the shoot and i spotted another JCW – Chilli Red with a Black Roof & JCW Rear Spoiler (later found out they were a member of Totalmini).

I arrived at the Test Track to find a BEAST of Mitsubishi Pajero that looked liked it had ever been cleaned but still it had this MAGIC to it – guess it was the LEGENDARY owner – Kavin McLeod (Great guy).

Then just after that a Classic MINI turned up. Everyone was great to talk to and everyone spoke about the mischief they had been up to with their cars.

Whilst this was going on i was trying to get my JCW all shiney again : D

We were taken on to the test route to the Photoshoot location which was epic drive with an Leguna Seca like corkscrew bend.

We are driving at 60mph and this Mclaren MP4-12C blew past us at least 150MPH it actually shook our cars.

We lined up our cars for the shoot to become stars, actually scrap that my car is more famous then me : /

A Koenigsegg CCR turned up for a potential buyer and it sound biblical at full throttle!!

After some nice lunch it was back to TV Shoot which was really fun as we drove around the test track and a Camera car drive in front of you.

Me being the Joker i am i wanted to sit in the back and i have a go in the camera car to which i was allowed. I was smirking and giggling all the way around, when they took me for a spin round the track.

I finally got to drive a classic MINI that day and i really want one now!!! There is so much room in them plus all the bits and they very easy to work & tune (the saving pot has begun). Made a MINI Mate that day Dave Itzy – the owner of the Classic is a professional Photographer as well (Dave Itzy Media).