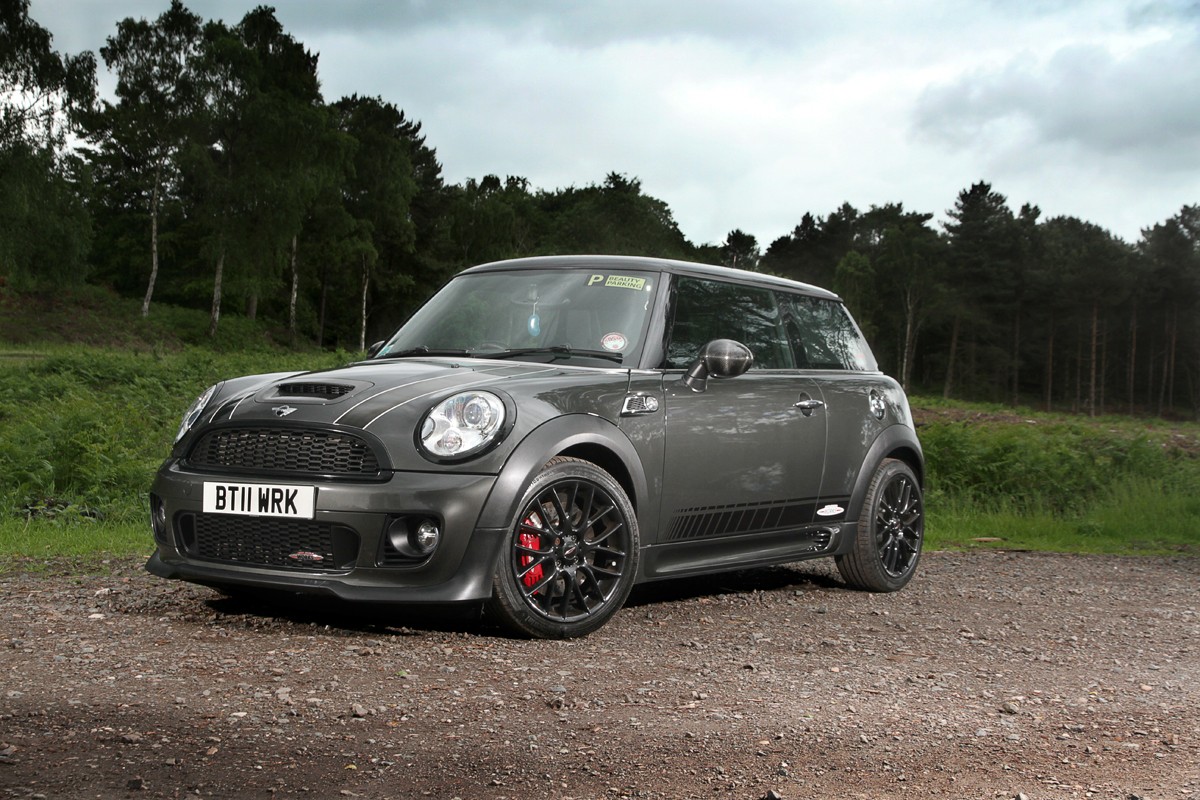 I didn’t think I would be here when I went into the dealers to spec my JCW. Little did I know my choices and persona would translate in my JCW being loved the world over. I was that kid who picked up car magazine and flicked through them, wondering one day I could own a car just like that. Modern MINI Magazine gave me that chance for my JCW to grace its cover for MINI owners and for some kid to look up to my JCW.

I have always said that my JCW changed my life and it did, when I showed you ‘My MINI Story’ late 2013. The road to this moment was hard given the pain in 2011 but it was a blessing in disguise with my JCW keeping me going. Along the way the JCW has changed and so have I with the people I have met across the world. I still scratch my head on how a car can bring so many different people together because of their love of MINI.

It’s soon coming to 3 years since I drove my JCW out of the showroom and BT11 WRK was brought into the world, so I wanted to do something special to mark this occasion. I contacted MINI Modern Magazine about having a feature and asked for some tips on becoming a automotive journalist and Sarah didn’t shy away from helping me. I truly appreciated her advice and took it forward be contacting various local newspapers and media outlets for  a freelance or voluntary roles but sadly I was unsuccessful so I carried on with my website.

Some people have mocked it, I have told my big organisations my publication isn’t big enough to allow me access to events and I have been called a ‘talented amateur’. From all those negatives all it takes for a single person to come over to me at show just say I have read the blog and follow you on instagram for it all to vanish. It’s the passion within me that drives me, the loyal supporters and that random person saying ‘Nice car’.

People have asked why the batman references in my online presence and JCW?  Because Bruce Wayne lost everything dear to him and all that money he couldn’t do anything. Yet through his pain, suffering and angry he was shaped into The Batman a character which I have watched from my childhood to the present day. The caped crusader has battled with his inner demons and his direct opposite The Joker whilst sticking to his strict code of not killing and doing the right thing. I could do on for days I how draw upon this fictional character but I secretly wished I was a billionaire philanthropist and had my own Alfred.

Will you wanting the Batpod, Sir? In the Middle of the day Alfred not very subtle. The JCW then?

You can read into as much as you want about me or Batman but the ‘Dark Knight’ nickname wasn’t given to my JCW by me but instead of other MINI owners after meeting me. But you will have to wait a bit longer for me tell you the meaning behind my Instagram name of D4rkhorse…

The email came through in the middle of the 2013 nearing the end of the show season, Modern MINI Magazine wanted to do a feature on my JCW and wanted arrange a date for the shoot. I was contacted by James Wallace aka Jimbo a freelance car photographer who is outright car nut!

Here is his story

I’ve loved cars and everything with wheels ever since I could bury Micro Machines and Matchbox cars in my Mum and Dad’s garden as a littl’un.

That genuine passion and enthusiasm for everything automotive miraculously turned into a job as the Deputy Editor for VW GOLF+ magazine back in 2003. Fast forward to 2010 and the decision to try my hand as a freelance snapper and writer has seen my work published in Performance VW, Volksworld, Camper + Bus, Miniworld, Classic American, VW GOLF+, Total BMW, Fast Car, Performance BMW. Redline and Retro Car magazines.

Primarily it’s a passion before a job and the people who have spent months, years, even decades building their dream machines deserve someone who cares about the results as much as they do

You see what I mean that he loves his car and being around them so you can imagine the time he had around me and the JCW.

With a time and date set, I got my Mr Miyagi on for my JCW’s big day

The next day James arrived at my house so we could travel together to my photo shoot location of choice and as luck would have it rained : /

With introductions done and the JCW met we rolled out together to Cannock Chase the location of the photo shoot. The CQuartz  coating and CarPro Reload were working their magic at motorway speeds as the beading was insane as the JCW was self drying. By the time we got the Cannock Chase all I had to do was to blast the JCW with a quick detailer and she was ready to go.

Cannock Chase is located between Cannock, Lichfield, Rugeley and Stafford. It comprises a mixture of natural deciduous woodland, coniferous plantations, open heathland and the remains of early industry, such as coal mining. In short its like a national park/area of beauty but it happens to have long straights and some twisites which was perfect for my shoot as I didn’t want the generic parking lot or graffiti wall backdrop as I am NOT NORMAL.

I found a spot which was perfect because it allowed plenty of space for different shooting angles, backdrops and rolling shots.

Jimbo whipped out his camera gear and began working his magic whilst all the walkers, cyclists and drivers buzzing around came to a stand still as they saw the flashes and peperami action (that’s not a typo – Ali G movie reference).

I dived into the history of my JCW, MINI UNITED 2012, national geographic shoot and all the people have met along the way

The feature on my JCW is for everyone to see how my MINI changed my life and that is more than the some of its parts while being a personification of my personality.

What I loved about working with James was hee understood that every car has past and every owner has a story.

He wasn’t mucking about when he was taking SHOTS as he began to lying down on wet mud???

I was like what are you doing mate?  I can great a shot from down here!

You sure James? Yeah I am fine mate

What about your clothes? Doesn’t matter

As we began getting some great shots it started to rain so everything got packed away but we were back at again it as it was short sharp showers but it was a constant battle as mother nature had other ideas. I was constantly drying down my JCW whilst James was trying not to get the gear all soaked whilst flashing away with the camera.

After all the still shots were done we went for some rolling shots as I wanted to show off the DRLs given the lack of MINIs having them plus I knew a nice little section of road with a banking corner which would look amazing. Yet again it rained and whilst James sat amongst the grass, mud, stones and drive by traffic near the road like a ninja and took shots of the JCW coming full throttle out the bends and driving past him as I went the other way for multiple runs.

As the batteries and memory cards filled up or ran of juice the shoot came to an end with me only seeing a few images on the little camera back screen I knew I had to wait till the next issue of Modern MINI Magazine before I would see them which made the drive home gut wrenching.

As the days rolled past and last event of the MINI show came to a close and winter drew in everything was quiet expect my inbox when James emailed back saying the write up needs to done to fill the pages of my feature. I filled in the questionnaire and sent it back which was returned with a phone call from James saying you couldn’t have it even more passionate if you hand the keys to me for a week. I am just happy to share my story with everyone and I hope everyone enjoys reading as I am only a newcomer to the MINI scene since the summer of 2012.

To mark the 2nd year anniversary of jcwadventures.com I will be flying over to the states to do MINI TAKES THE STATES but I will be bringing along two members of The Fast Five (Christine and Phil) so look out for the infamous black and English accent. I am riding shotgun with LilCoopr aka Christina in her Cooper S Convertible ‘Stell4’ and I couldn’t think of a better person do the trip with!!! She is another MINIac who has deep-rooted passion for the brand and our MINIs are very much personification of our individuality.

Why not ship over The Misses? I looked into it and it came to £3,000 which is too much consider without me selling a kidney

Back to the flashing lights! My JCW will be gracing the cover Modern MINI Magazine on this month – 28.03.14

I would like to give a special thank you to Sarah of Modern MINI Magazine for publishing my JCW and being great person to talk for advice and all things MINI.

James thanks you for making The Misses look sexy and putting up with the rubbish weather. I don’t know how you put with me for a few hours but I am truly thankful for the shots and  immortalising my JCW to pages of Modern MINI Magazine.