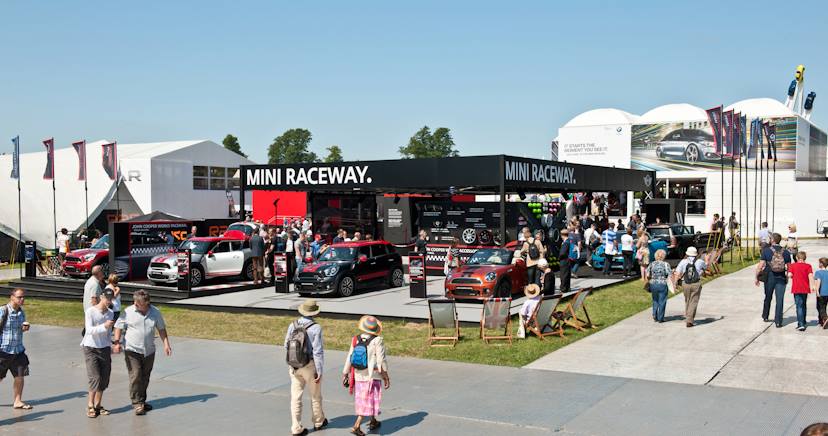 The biggest and fastest car show of the year is here with the numbers to match with Porsche 911’s 50th, McLaren’s 50th, Aston Martin’s 100th, Lamborghini’s 50th, WRC’s 40th, Le Mans’ 90th and of course the 20th anniversary of the Festival of Speed.

The centre stage was set already for these top marques to strut their stuff on the certain to get a look from lucky 5% of the world’s population who can afford them whilst the rest if us mere mortals sat there like patting dogs.

2009 was my 1st visit to the show in my JCW after it had been run in but this time I round my JCW has had alot of MINI adventures and is well know and adored by MINI owners across the globe.

I always get told by my work colleagues or people who know me that MINI should make their brand ambassador as fully distilled in lifestyle that is MINI. I am not gonna lie the JCW is always a talking point and some how I always wriggle in my MINI to any topic so I am really a self-confessed MINIac.

99.9% of any of my social media posts are about my MINI so it wasn’t hard for MINI UK to pick up my obsession so much so I was invited to attend the Festival of speed as a VIP guest and bring a few people with me.

I keep in regular contact with Christine all the time as we a good catch up and giggles on the weekend. I told her I managed to blag some more tickets for Goodwood and whether she would like to come with along with my younger sister and little brother.

She accepted and the stage was set for her to go her first festival of speed. We met up at a service station near by Goodwood estate so we drive in together in convoy. As we drove up together we met to what seemed like the sultan of Brunei’s car collection had come out to see who their new friends would be.

There were a lot of Porsches as we drove and parked up into our VIP parking. Here is a fun fact for you all – 80% of all Porsche 911s ever made are still on the road.

As I previously said the number of exotics, super cars and legends of the automotive world was staggering number but wait a second we were still in the park.

As we passed all the tasty exotics we were met with race cars legends ranging from rally cars to Le mans racers with the infamous Martini livery.

Bentley was showing off its return to Le mans bringing its two race cars which ran in the race in June (They weren’t washed).

Too be honest I think they were trying to show off as they brought their recently unveiled GT3 race car.

Porsche wasn’t too far behind all staged up with its race winning cars. Don’t quote me on this one but Porsche has won the most races overall in motor sport.

Then I spotted the uber rare M1 racecar which really got to perform on the track as race series it was built for stopped so BMW was left with a big bill. It was a troubled birth to begin with as Lamborghini was commissioned to build the cars for racing but conflict arose so BMW made the cars themselves. This BMW rarest car as road going cars were made due to homologations to which 209 were built.

Remember I told you all about Bert???

Yes Bertie that small little Mini cooper sport well it might be small but its mighty. Ian his owner decided to put his Mini in competition to win centre stage at the Goodwood festival of speed on the MINI stand.

Your never gonna guess what happened?

That little guy, no not Ian! Little Bertie won the competition and the minions from MINI gave him the call to tell him they would coming soon to pick him up.

You can clearly see he was jealous of my JCW colour and decided to copy me but give his own twist on the interior with toffee lounge leather. He has given his new MINI the name of chewie because it reminds him of chewbecca from star wars (He has a little plush toy to match which sits in his cup holder).

Bert was picked up bundled into a trailer for transportation to be detailed for his BIG day out on the MINI stand for the Goodwood festival of speed. Ian was given VIP hospitably by MINI UK whilst Bertie was under their car with photo shoots and very famous racing driver Paddy Hopkirk coming down to say Hi.

What do you mean this isn’t the 3rd Gen MINI??

I wasn’t gonna let Ian have all the fun!!! As we all know why you buy a MINI is to have fun behind the wheel. So we parked our bums in some of the MINIs line up of model with me looking at the JCW paceman thinking it need more power while my sister was dreaming of drop top posing in the Kite blue coupe. Little Adam was more bothered about jumping on the MINI bumper cars!!!

Yes you heard me right MINI bumper cars. Plenty of go with no need for insurance but the potential of mess hair and shaken brain topped with a BIG Grin on your face.

Little Adam was enjoying himself with the wind in hair and road rage activated. I guess you have to start from somewhere.

We weren’t the only loonies who wanted to join in on the fun as the whole Wacky racers crew came down to settle the score once and for all.

It was across the way to the BMW stand where M was the word with the M5, M6 & M135i taking front stage with the all new 435i M Sport lurking upstairs in the owners lounge.

Next is the upcoming sensation of 2014 the Alfa Romeo 4C with its light weight carbon fibre tub with 240 BHP rear wheel shenanigans which will see the brand win back heart of enthusiasts worldwide.

Remember you not a real car person until you own a Alfa….

There are a few brands which I hold dear to the petrol filled heart – MINI, BMW, Lotus, Porsche, Mercedes, Lamborghini and Pagani. So you guys and girls can now imagine what my ultimate seven-day car garage would look like.

I love the lunacy of the AMG marque as its like going out on a date with axe murderer in pinstriped suit. You know it looks dapper and will show you a good time whilst its drunk but it has all the power in the relationship, however don’t fall asleep before it does as you might not wake up.

You have all heard, watch and read about the Mercedes new offering in the hot hatch market with the CLA & A Class AMG.

I am not sold on the CLA visual appeal as it looks the designer finished his final look and some backed into the clay model. On the other hand the A class is the looker of the bunch and interior is beautifully finish with nice touches here and there but whatever you do not buy it in south sea metallic blue.

Its staggering how AMG’s first attempt at hot hatch market with 2 litre turbocharged engine that produces 360bhp and dispatches 0 to 60 in 4.6 seconds making it the quickest hot hatch you can buy.

As we headed out the Mercedes booth the red arrows had begun their display over head in formation and showing why they are the best at what they do.

The Italians didn’t like to be out shined by anyone and the prancing horse was out in force with the V12 F12 Berlinetta with the ludicrous 730bhp going to the rear wheels only. THE BRAVE MAY ONLY APPLY…

Ferrari had brought their ‘Entry’ level super cars with them

If you ever wondered why I say AHHHHH DRIFFFFTTOOOOO –

Here in Great Britain we have our gentlemen racer and when we do drive ONE must take their time and enjoy the opulence. Once conditions are clear one puts down their right foot like a sir in the RR…

Wraith is the most powerful Rolls-Royce in history. Behind the deep-set Pantheon grille sits a potent 6.6 litre, twin turbo-charged V12 engine. Delivering 624 bhp with 800 Nm of torque, it powers from 0-60 mph in 4.6 seconds. Even with this formidable power, Wraith is every inch a refined Rolls-Royce with electronically controlled air suspension that creates the signature ‘magic carpet ride’.

The festival of speed is called this for no reason as there is little squiggle of tarmac called the Goodwood hill climb were the money is object supercars and exotic battle it out for the coveted King of the hill.

The first hyper car I was the Koenigsegg Agera whilst humming away at its idle with an AUDI R8 GT behind it taking in the exhaust fumes of Sweden’s finest.

The line up front was too bad either F12 on pole, Careera 4s and waving the British flag the Noble M600

It wouldn’t be true car show without a Bugatti

For my MERICA the Camaro

Salmon pink Bugatti Veyron – not sure what to think of it

Still my all time fav the Ferrari F40

As you all know we don’t truly group as all that happens is that our toys just get more expensive. What happens when I say this …and now here they are!!!! The most daredevil group of daffy drivers to ever whirl their wheels in the WACKY RACES. Competing for the title of worlds wackiest racer. The cars are approaching the starting line.

930 turbo flatnose called Flachbau in German, straight from the factory was offered as the ultimate 930 Turbo, the this model had an upgraded body and a 330 bhp engine. Costing nearly double the standard model, the Flachbau was rarely ordered. Before 1986, Porsche had offered the Flachbau body option out of its customer service department known as Sonderwunschen.

Despite the panels being slightly heavier, they were modeled after the 935 race car for top speed. The conversion required extended rocker panels, wider rear flares with scooped vents and flip-up headlights up front with functional louvres allowing a top speed of 171mph.

Epic Clapton’s one-off Ferrari specially built homage to the 512 BB to which he has owned 3 but that’s not the only 3 to the story as it has been reportedly costed £3 million.

The under appreciated Spyker C8 Aileron

McLaren had its own stand with its road & race cars

Porsche had its usual stand and grass area for the off road experience. The stand had all the Porsche through the ages.

That wraps up the day I spent at Goodwood with my veins filled up 99 octane fuel, my lungs filled with exhaust fumes and ears vibrating to the sounds of revving engines.Till next year Goodwood…